After observing DP William Ruto’s activities in recent months, I have become convinced that he believes he is some sort of deity, a god.

How is the following behaviour normal, any way you look at it? Ruto holds a public meeting where he discusses mundane issues, and makes some empty promises to a Womens’ group. An hour later, Ruto is riding in his helicopter heading for the burial of murdered Sgt Kipyegon Kenei, the man who was in charge of security at his Harambee Annex office.

At Kenei’s burial, he laments how the murder investigation is being used to fix him. He complains bitterly about ‘powerful ’people he claims want him dead. He even cries.

A few minutes after Kenei’s burial, Ruto flies to another political function, where he discusses mundane political matters with his allies and (paid) ’supporters’.

The only way I can explain Ruto’s behaviour is this: Whatever he does, he believes his god sent him/wanted him to do it. Therefore, when he pockets billions meant to build a dam that would help poor people, he genuinely believes his god wants him to pocket the money, so he can use it to impress poor Kenyans, who would in turn elect him president, ‘as his god has commanded’.

If he ordered Kenei’s murder - as seems likely - he was convinced that is what his god wanted, because Kenei’s plans to expose his involvement in a multi-billion arms scam went against his god’s plans for him [Ruto].

Many Kenyans are wondering what is going on in the country. Some genuinely believe (very erroneously ) that the tension in Kenya - especially Rift Valley & Mt Kenya - is caused by BBI/HandShake, and therefore if BBI was stopped, ‘things would go back to normal’.

These cartels had become a law unto themselves. Although the cartels in government had become very powerful, they were always ‘AMORPHOUS’ ie didn’t have a single person as their national leader. Until the GREEDIEST KENYAN IN HISTORY, WILLIAM RUTO came along.

This is what I believe is happening in Kenya:

William Ruto has taken the title of Kenya Cartels’ Boss - The capo di tutti i capi.

The police bosses know this. The president knows this.

Place yourself in the shoes of Kenyan IG, or Director DCI, or Director ODPP, or President Uhuru Kenyatta. When you learn that the Deputy President is the head of the Kenyan underworld, what would you do?

To make matters worse, this Kenyan capo di tutti i capi is convinced the gods want him, nay, demand of him, to become the President of Kenya. Knowing this information, as the current president of Kenya, what would you do?
Top

The GLOBAL MAFIA like African leaders who are totally clueless about what REALLY goes on in the world. This is because such presidents will only be FIGUREHEADS, as the GLOBAL MAFIA loots and destroys the African country where the clueless leader is called President.

That is why the GLOBAL MAFIA loved Mobutu Sese Seko so much, and hated, and still hate Jomo Kenyatta.

In Kenya, the GLOBAL MAFIA want Ruto to become president because they know he is TOTALLY CLUELESS. Example:

Video Narration: Deputy President William Ruto has stolen so much public resources and used part of the loot to “buy MPs, Senators and other politicians.


William Ruto is a POWER HUNGRY, TRIBAL, CORRUPT, UNTRUSTWORTHY and a DANGEROUS WARLORD, who gave absurd conditions that threatened peace, businesses and lives of the Kikuyu, Kamba and Kisii communities and escalated violence in 2007/2008 Post Election Violence.

You can’t even organise to kick out the colonial power, because the same way they colonised you stealthily, they will use the same tactics to make sure you cannot communicate without them knowing about it.

You will be enslaved, yet the rest of the world won’t know about it. Much worse than direct enslavement, where you have the chance to organise a successful revolt, or to be helped by outsiders.

Therefore, Ruto becoming (colonising power puppet) President, means that Kenyans would start dying crossing the Mediterranean to go to Europe, because of hopelessness in Kenya. Other Kenyans would be enslaved in North Africa after they run out of money on their journey to Europe, or after being robbed on the way.

If in doubt, just look at the country up North that they colonised recently.

Every week, their citizens are found in different Kenyan towns, cramped dozens to a room, as they desperately run away from their country, because of hopelessness. 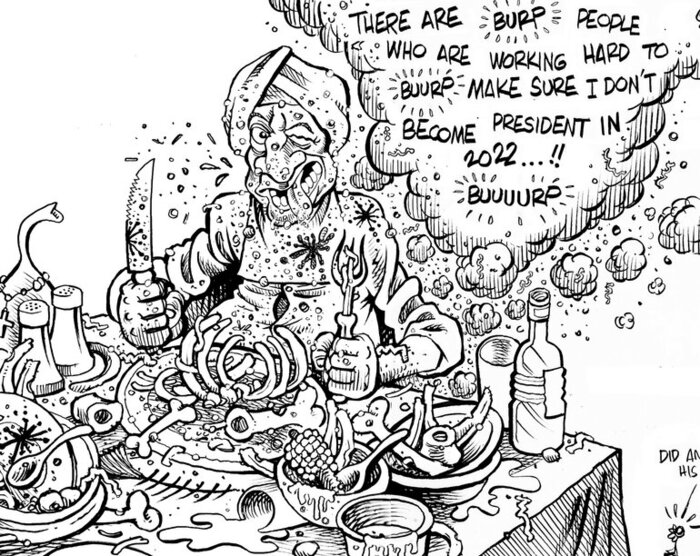 November 19 2020: Kenya Deputy President visits Dubai for a 4-day “private holiday”. “Coincidentally”, former Nigeria Vice President Atiku Abubakar - a politician with a lot of common with Ruto - also happens to be in Dubai on “private holiday”, in the same hotel as Ruto.

Such coincidences do not happen in real life.

This is what has happened:

Ruto has been feeling a lot of pressure lately regarding Kenya politics and BBI. He was getting ready to throw in the towel.

Suddenly, through “their” agents embedded into Ruto, “they” convinced him that he needed to go to Dubai urgently, to re-charge.

At the same time, “they” had powerfully connected people direct Atiku to head to Dubai (for a generously-funded holiday), and also instructed him on what to tell Ruto, once they met “accidentally”.

“They” selected Atiku to act on their behalf because Atiku has a lot of common with Ruto: Both have faced accusations of engaging in major corruption, undermining and falling out with their presidents, allegedly being denied visa to visit Western countries etc.

Therefore, Ruto would view Atiku as someone who could “understand” him.

Whatever advice Ruto received from Atiku, he believed it came from a friendly African “brother”.

Anyway, Ruto was advised to become more aggressive politically, and aim at surviving as DP until 2022, when he will contest for the Kenyan presidency, as the incumbent, technically.

Ruto was advised that there are powerful Africans, and also Western “friends of Africa”, who want him to become Kenya president.

Therefore, going forward, expect DP Ruto to engage in divisive, dangerous politics, aimed at dividing Kenyans even further. Also, he will vigorously oppose BBI, claiming that there are more urgent issues that government should concentrate on. 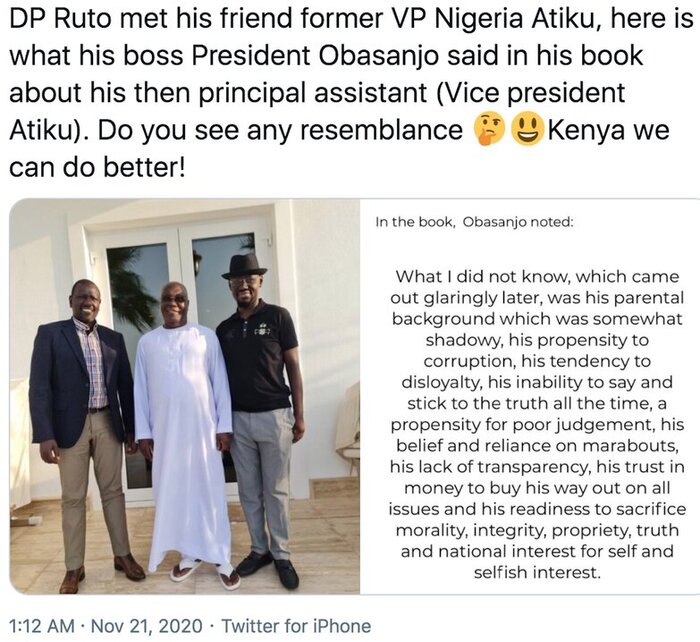 Around November 20, 2020, DP Ruto was in Dubai, UAE, where he held a secret meeting with Adil Khawaja and CEO of Abu Dhabi Islamic Bank (ADIB), Mr Sandeep Chouhan.

3. Khawaja is alleged to be engaged in MONEY LAUNDERING in Dubai for a top GoK official (see attached letter);

4. It is obvious who that official is. 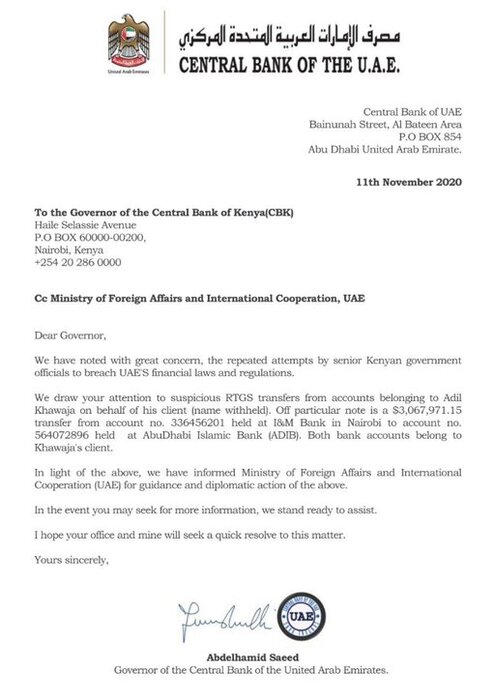 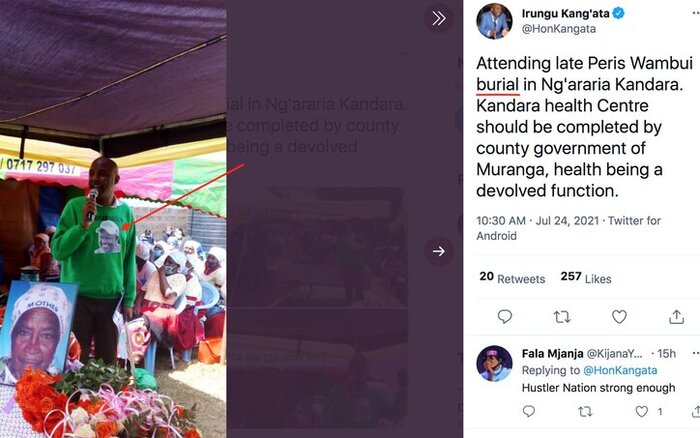 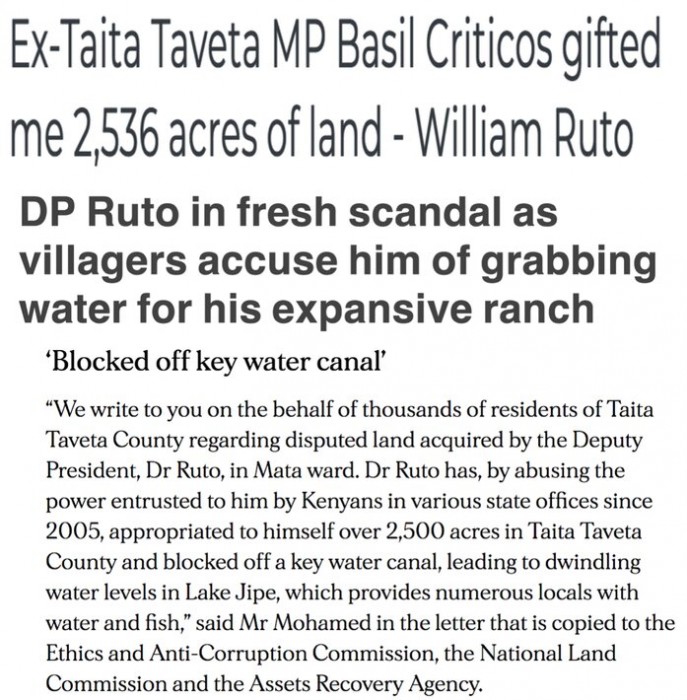 The crowd sides with the policewoman. They tell her “do not let him [pilot] intimidate you!”, “what he has done is very wrong” etc. The pilot senses danger and hurries away.

NOTE: This is at a village in Nyandarua, and none of the people speaking sides with the pilot.

Everything wrong with “hustler” CON is captured in this video:

2. He has contempt for ordinary Kenyans;