Farouk Kibet was first sighted in Kenya when he was already in his mid-twenties. Where was he living before?

Farouk Kibet is said to be very secretive. He is said to be mysterious. He does not speak about his past or his family. Even the people who work with him, when asked about him, their standard answer is “No comment”.

When people who are supposed to know him well are asked to say what is good about him, they answer “No comment”.

Some people claim that the name Farouk Kibet was a red herring, that his real name is Benjamin Kipkazi.


Farouk Teigut Kibet has called the shots around the DP over the past four years, determining the fate of those seeking to get access to the Deputy President, William Ruto, at his Harambee House Annex office, in Karen and elsewhere…

The Deputy President’s right hand man hit newspaper headlines for allegedly receiving money from a suspect in the National Youth Service (NYS) Sh 791 million scandal. The powerful Parliamentary Public Accounts Committee toyed for a while with the thought of summoning him for interrogation on the NYS saga before dropping the idea altogether…

Farouk was also among a number of Kenyans who were mentioned by the International Criminal Court (ICC) Prosecutor, Fatou Bensouda, for alleged involvement in the 2007 post elections violence. Bensouda claimed that Farouk stormed the Eldoret Police Station, at the height of the violence. She also accused him of tampering with ICC witnesses in the debacle that was the case against the DP at The Hague.

How is a person as suspicious as Farouk Kibet allowed to occupy such a sensitive position? Doesn’t this endanger Kenya National Security?

Is there any Kenyan who can state, under oath, that he saw Farouk Kibet, when he - Farouk Kibet - was 6 years old?

Is there any Kenyan who can state, under oath, that he saw Farouk Kibet, when he - Farouk Kibet - was 7 years old?

Is there any Kenyan who can state, under oath, that he saw Farouk Kibet, when he - Farouk Kibet - was 16 years old?

Is there any Kenyan who can state, under oath, that he saw Farouk Kibet, when he - Farouk Kibet - was 17 years old?

Last weekend, Emurua Dikirr MP Johanna Ng'eno was invited to a thanksgiving ceremony in honour of a young man who had just been employed as a prison warder. And what did the honourable MP do?

He engaged in hate speech. He insulted the young man’s employer. Who does that?

Did Ng'eno make the hate speech on behalf of Farouk Kibet? Does Ng'eno and Farouk have some secret association that even DP Ruto does not know about?

In the past one week, there has been several politicians in the Rift Valley who have made what appears to be well-coordinated hate speeches.

These politicians appear to be acting under direction of Farouk Kibet.

Is Farouk Kibet acting on behalf of powerful foreign interests? Considering Farouk’s involvement in 2007/2008 post-election violence, this is an extremely serious matter. 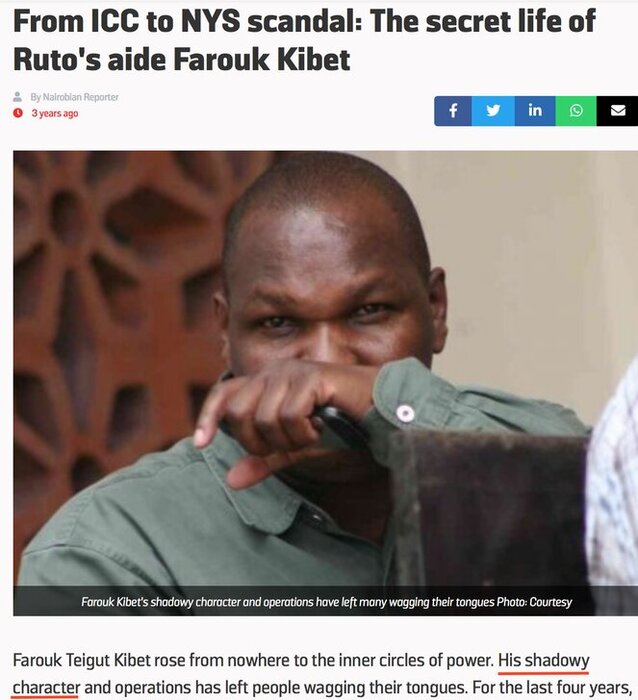 Is Farouk Kibet a Mossad-Kenyan?

If the answer to the question above is YES, then it explains a lot of events that have happened in Kenya in the last 20 years, that have been inexplicable. 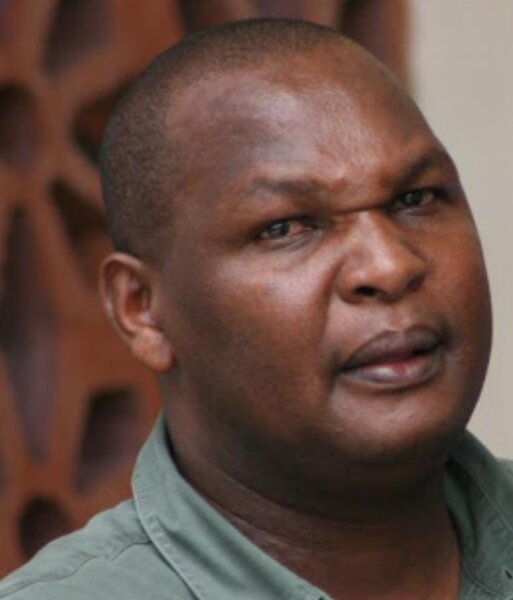 Pro-Ruto bloggers are fend secret GoK information by Mossad - that is MANIPULATED to fit Mossad agenda - though they (bloggers) most likely believe the information they receive is from GoK supporters working in government.

Same vetting exercise should be extended to people working for other prominent persons identified already as Mossad-Kenyans.
Top

Farouk Kibet - The CONQUEROR of Kenya

1. Question: How can Farouk Kibet be foreign-born, and a spy, yet his late father Paul Teigut was a Kenyan? Mzee Teigut was a real person. He died recently, and his funeral was attended by who-is-who among Kenya political elite, including the Deputy President William Ruto.

Answer: Only 2 people ever saw Farouk Kibet anywhere in Kenya, when he was less than 20 years old - Farouk himself, and Mzee Teigut (may he RIP).

3. People around DP Ruto state openly that Farouk Kibet is the person closest to Ruto, outside of Ruto’s family. Farouk is the person who stands between Ruto and the rest of the world.

No wonder, not too long ago, DP Ruto cried, saying that some people had hatched a plan to kill him. He said that he had “left the matter to God”.

It is very likely that Farouk Kibet laughed his head off that night. 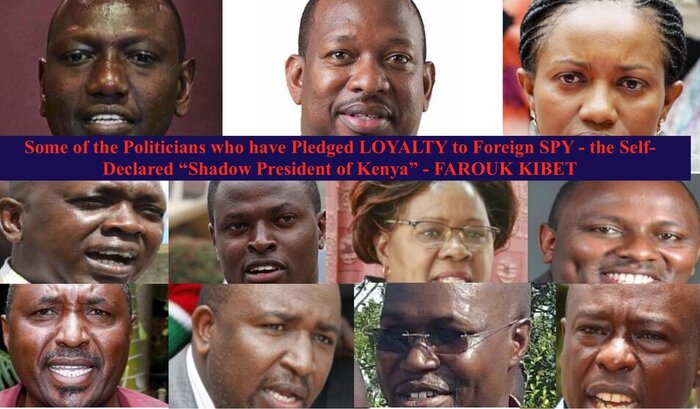 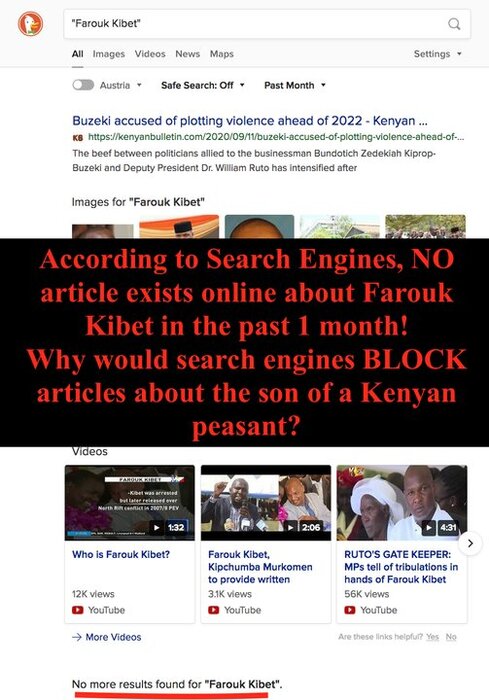 Some of the online posts are about 1-2 weeks old now. However, the blog post above is 2 days old.

Using the same search engines, I searched for recent articles about “Farouk Kibet”. NONE showed any article talking about recent revelations about him.

CONCLUSION: Farouk is definitely a Mossad-Kenyan. No Kenyan, or even African person can compel the search engines above to hide results about him/her.

NB: The way this Farouk case is developing, they might decide to kick me out of the internet completely. Therefore, make sure you download the PDF of this story from the above link, or below. 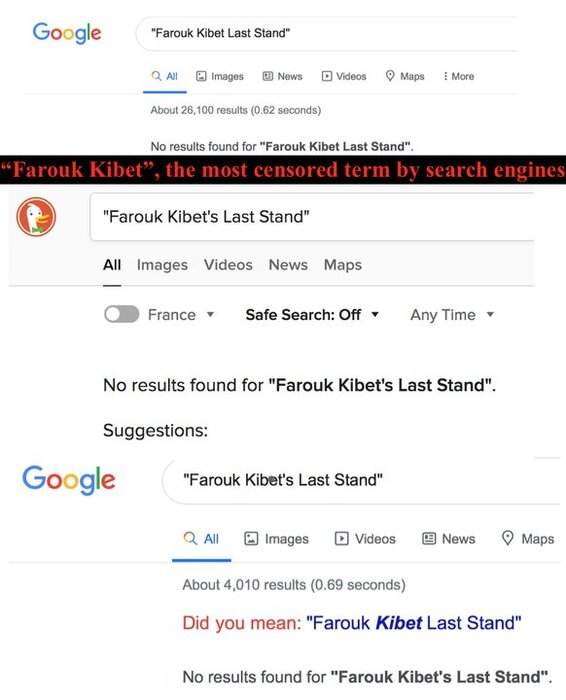