Every time DP William Ruto talks about BBI, he either says “certain sections of BBI are bad”, “it is not a priority”, “there are more pressing issues”…but he never says he supports BBI. However, he has completely refused to publicly state that he is on the NO side in the coming BBI referendum.

DP Ruto and his supporters - TangaTanga/HustlerNation - certainly talk about BBI in the exact manner a person opposing BBI would talk.

In other words, Ruto and his supporters are firmly on the NO side. So why don’t they want to state so publicly?

Because Ruto knows he doesn’t have the numbers to defeat YES side during the referendum.

How is that possible, yet “everything points to Ruto being the most popular politician in Kenya”?

It is all an ILLUSION.

The most powerful spy agency in the world - that spies for TangaTanga - has told Ruto, through their local agents like Farouk Kibet, that it would be political suicide for him to lead the NO side in the BBI referendum, because they don’t have the numbers.

Something many Kenyans might think is fiction, but is in fact reality: There are more than 1000 foreign-born Spies/IMPOSTORS living in Kenya. These are people who look like Kenyans, have Kenyan names, and speak Kenyan languages.

They all come from a certain 1st world country. They were trained about Kenyan culture and languages, and then clandestinely sent to Kenya. Some are well known, but most are not famous at all.

My focus, however, is on the “unknown” IMPOSTORS living what appears to be mundane lives around the country.

Most of them are based in Nairobi and the Mt Kenya region. My estimation is that the foreign-born Spies/IMPOSTORS living in Nairobi could be around 500; in Mt Kenya region, around 1000; and the rest of Kenya - 500.

These IMPOSTORS do various jobs under the radar, undetected by Kenyans. The jobs they do include:

- Attending - in large numbers - political rallies of certain politicians, and cheering, to make them appear to be popular on the ground;

- Attending - in few numbers - political rallies of certain politicians, and heckling, to make them appear to be unpopular on the ground;

- Popularising certain political players, on the ground and online;

- Slandering certain political players, on the ground and online;

- Popularising certain policies, on the ground and online;

- Misleading Kenyans about certain policies, on the ground and online etc.

It is these foreign-born Spies/IMPOSTORS living in Mt Kenya region that created the PERCEPTION/ILLUSION that BBI was unpopular in the region.

Because the ILLUSION is not based on reality on the ground, the foreign spy agency has used their local contacts to have BBI process sabotaged at every stage, by filing various spurious court cases.

They have been doing this because, when BBI referendum is held, and results are opposite of what Kenyans on the ground were told they would be, then Kenyans would know there is a very BIG SCAM going on in the country.

Out of Kenya’s 47 counties, only 2 have voted NO for BBI. In Mt Kenya region in particular, all the counties voted YES, by overwhelming majority.

Murang’a county was presented as a Ruto stronghold, and also a BBI NO stronghold. Even local Senator Irungu Kang’ata said as much, and even defected to TangaTanga, “because that is what Murang’a people support”.

Murang’a MCAs voted 52-0 for BBI. Therefore, everything else Kang’ata said can be assumed to be lies, based on ILLUSIONS.

The foreign spy agency behind TangaTanga must have realised that Murang’a people have started asking questions about how what is being said, is very different from facts on the ground i.e. Ruto is not popular in Murang’a as “most people were saying”.

Last weekend, Ruto held several political/Harambee rallies in Murang’a. The crowd was huge - at least 500 people at each event. His press/social media team and TangaTanga politicians happily shared the videos and photos on social media, to prove that Ruto is “still very popular in Murang’a”.

REALITY: If the crowd was 500 people, then most likely 300 were IMPOSTORS, and 190 had been paid and ferried by #TangaTanga politicians. Genuine attendees could even have been only 10. At each of the rallies.

Therefore, Ruto is ordered by his IMPOSTOR handlers to hold daily political rallies, so that they can use their fellow IMPOSTORS to attend the rallies and make it appear that Ruto is very popular “on the ground”.

Therefore, the local TangaTanga politicians would believe Ruto is indeed still very popular “on the ground”.

The “OPTICS” created by the very enthusiastic pro-Ruto cheering IMPOSTORS, when seen on social media or on TV, makes many Kenyans believe the DP is very popular all over the country.

This strategy has helped Ruto a lot, politically.

There are many Mt Kenya politicians who are in TangaTanga because they believe Ruto is very popular in the region.

If these MPs realised that it was all an ILLUSION, that Ruto’s real support in the region is actually less than 5%, they would desert him. And if these Mt Kenya TangaTanga MPs desert Ruto, then his IMPEACHMENT motion would be guaranteed to pass in parliament.

That is why Ruto has been holding rally after rally in Mt Kenya region, to show everybody how he is loved by local people.

Therefore, for DP Ruto’s political survival, he has to continue holding political rallies in Mt Kenya counties, almost daily, so that the IMPOSTORS can attend, create big crowds, and make him appear to be very popular.

The reason that Ruto hates BBI referendum is because, while one IMPOSTOR can appear in various HustlerNation rallies around the country - “to create crowd” - when it comes to voting, an IMPOSTOR can only vote once, and the SCAM will be discovered. 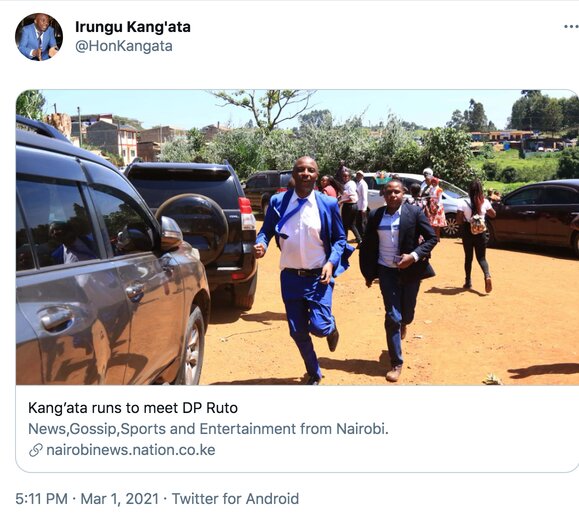