There are about 5,000 foreign-born IMPOSTORS living in Kenya. They were brought secretly to Kenya by the MOST POWERFUL SPY AGENCY in the world.

They have Kenyan names and speak Kenyan languages. They have blended so well into Kenyan society, without raising any suspicion, that some have even been elected to Parliament.

Their ultimate goal is to conquer Kenya, by having one of them become the President of Kenya. Other IMPOSTORS would be Cabinet Secretaries, Ambassadors etc.

Kenya would have been colonised without firing a single shot. Real Kenyans will become slaves, and yet the rest of the world wouldn’t be able to help, because they won’t know about it.

These 5,000 IMPOSTORS do various SABOTAGE activities under the radar, undetected by Kenyans. The jobs they do include:

1. Attending - in large numbers - political rallies hosted by DP Ruto and his allies and cheering, to make them appear to be popular on the ground;

2. Attending - in few numbers - political rallies of politicians seen as a threat to DP Ruto’s interests, and heckling, to make them appear to be unpopular on the ground;

5. Popularising unpatriotic Kenyans, on the ground and online;

6. Slandering patriotic Kenyans, on the ground and online;

Defending Kenya From Being Colonised Through The Backdoor

The spy agency that brought these IMPOSTORS to Kenya has calculated that, their plan will be accomplished by first making William Ruto president. This is because they embedded their IMPOSTORS into Ruto long ago - e.g. his supposed “aide” Farouk Kibet.

To sabotage mossad’s evil mission in Kenya, and rescue Kenya from being colonised, is to make sure you don’t support the politician they want you to support - DP. 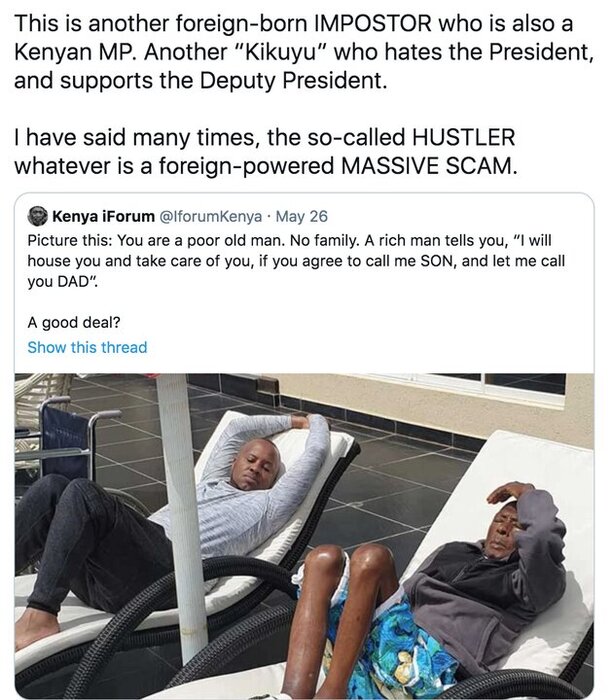