Federal and state regulators in the U.S. are preparing to file antitrust lawsuits alleging Google has abused its dominance of online search and advertising to stifle competition and and boost its profits”
https://abcnews.go.com/Technology/wireS ... s-70715734

Rigging by social media and search engines is out of control.

According to Jay Shapiro, the Founder and CEO, of Usiku Games, Gumzo is Africa’s first innovation in video conferencing built by Kenyan developers who have exhibited a high level of skill in coding and system architecture…

In addition, Gumzo have committed that 50 percent of all fees raised on the platform will be donated to COVID-19 response Fund, NGOs in Kenya, including the Pwani Youth Network, Team Pankaj & Mombasa Red Cross.
https://www.capitalfm.co.ke/news/2020/0 ... tem-gumzo/

A few years ago, a certain Kenyan had an app on Google Play with 100,000 downloads. He approached every Kenyan media house he knew of to write about his app, but none was interested.

Here comes a Canadian expatriate ‘tech entrepreneur’ with 1,000 downloads, and has all the media coverage a similar Kenyan-owned company can only dream of. Amazing.

I am not suggesting that companies/products by expatriate ‘tech entrepreneurs’ shouldn’t be given media coverage, but Kenyans should be given more coverage - because Kenyan developers are already heavily disadvantaged.

Like has repeatedly been stated in this thread, the best gift ICT ministry can give Kenya is a search engine. Or at the minimum, a forum where Kenyans can FREELY discuss ideas, exchange links etc.

I do not know of a single website/platform where Kenyans can FREELY discuss the issues in this thread. This does not mean that there are no such websites/platforms. It only means that they are not easily discoverable using rigged search engines/manipulated social media.

I once went to REDDIT to discuss with other Africans about how Africans can network, and create and publicise their own TECH platforms and related products. I was kicked out. BANNED.

Currently, if you go to social media/forums to talk about African-made tech platforms, software etc. you will will be told about the “already successful” Jay Shapiro’s “African” company, or some other African-based expatriate ‘tech entrepreneur’-owned company.

If you insist on truly African products/companies, as in AFRIKAN made & owned, you will either be kicked out, shadow banned, or trolled to obscurity.

Google has been accused of collecting data on people’s whereabouts and their searches even when they disabled these options on their mobile devices.

The lawsuit, filed by Arizona Attorney General Mark Brnovich, alleges that certain apps developed by the Silicon Valley-based company tracked and stored location records and search history on Android-running smartphones even when users turned off these options.

The apps that allow the collection of personal data without users’ consent include mapping and weather, which violates Arizona’s consumer protection laws, the lawsuit says.
https://www.rt.com/usa/489967-arizona-g ... a-lawsuit/

To ICT CS Joe Mucheru: We keep reading/hearing/watching in the media about “Kenyan” info tech products courtesy of expatriate ‘tech entrepreneurs’. These Kenyan-based expatriate ‘tech entrepreneurs’ admit openly that:
1. They are not programmers/computer scientists. They are “businessmen”/hustlers, and had done nothing significant in their home countries before they came to Kenya;
2. Their products are 100% made by Kenyans.

ICT ministry will get all the information they need to make Kenya an African ICT powerhouse (Where Kenyans create & OWN their successful software/platforms & expatriate ‘tech entrepreneurs’ will be struggling to compete with Kenyan-owned tech platforms).

(NB: If ICT ministry arranges such a meeting, they should not expect to meet with BMW/V8-driving programmers. These Kenyan expert programmers/computer scientists have been exploited for long. So, don’t belittle them when they arrive at the office all sweaty, after walking from town on foot - and it would not be because of a deliberate physical exercise).
Top 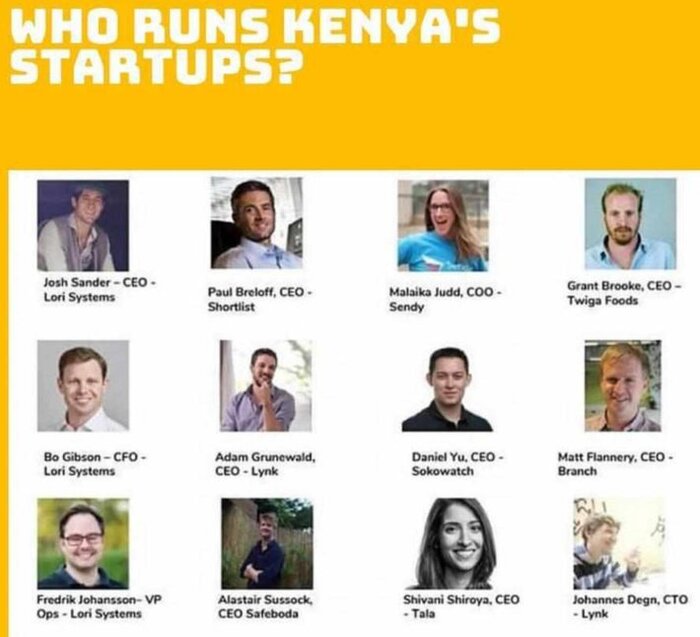 I got these graphics from the internet, and I cannot vouch for their authenticity. However, assuming the tech companies are based in Kenya, and the CEOs are as represented in the graphics, is it right for the situation to be like this?

The reasons behind this fraud have been featured again and again on this thread and other threads on this forum.

This is also a major security risk.

Why is there no such situation in other sectors of Kenya economy? 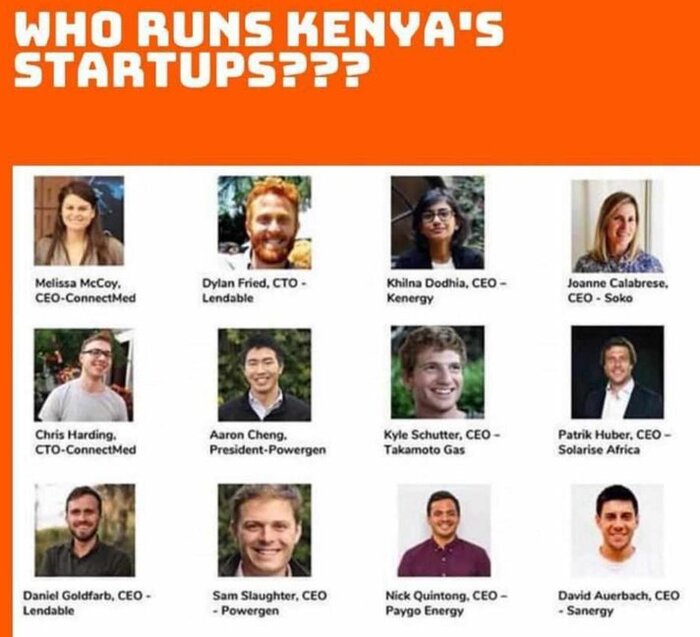 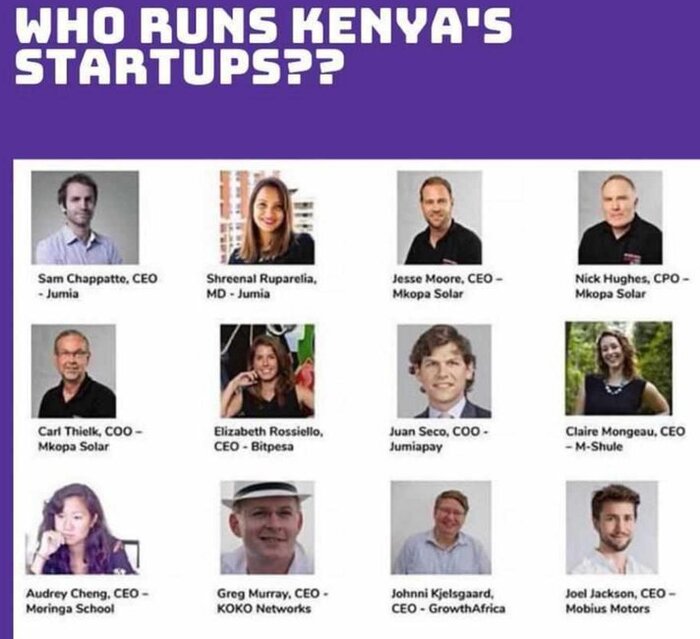 NOTE: Mobius motors shouldn’t be included since it is a manufacturing company.

Concern is not with manufacturing or other industries - only the Information Technology Sector MONOPOLISATION by foreigners, while Kenyans in the sector are sabotaged and bullied.
Top

Sometimes it is easy to blame someone because of appearing not to be doing their job right, yet there might be mitigating circumstances.

In the past few years, I have not seen any actions by either Kenya’s foreign ministry, defence ministry or interior ministry that I saw as sub-standard.

However, I believe that the Cabinet Secretaries of these 3 ministries sit in the National Security Council (not sure whether that is what it is called). This means that the 3 CSs get solid intel from National Intelligent Service (NIS) regularly.

The intel they receive no doubt helps them a lot in planning how to manage their ministries.

The same cannot be said about ICT CS.

I am not suggesting that ICT CS should sit in the National Security Council. No. However, the way the world is at the moment, and especially because of reasons explained in several posts on this thread, and also on other threads, it is crucial for ICT CS to be briefed by Kenyan intel about matters to do with his ministry.

The briefings need not be frequent. Once a month would be enough.

This is because, if ICT ministry does not improve, all efforts Kenya is doing to grow the economy will be to no avail. Good management of ICT ministry is key to Kenya recording impressive economic growth rates.

I will give 2 reasons why I make the above conclusion.

According to these Western Opinion Shapers, the countries doing well in Sub-Saharan Africa - the countries where Western investors should aim to invest because of their good policies and promising economies - are countries like Ethiopia, Ghana, Botswana etc. Not Kenya.

Experience has taught me that, when you see statistics on the ground being opposite of what is being claimed by ‘experts’, there is ALWAYS something cooking. Things like this are never coincidental or accidental.

There is always a racket somewhere.

Currently, I estimate that at least 95% of information Kenyans receive is managed by the global-powers-that-be.

If this situation was reversed, as has been suggested on this thread, then the racket mentioned above would have been exposed and neutralised.


The hate that they have for LAPSSET is so deep, that it is irrational. These are people who are not Kenyan, and neither are they citizens of neighbouring countries, yet they are so mad about an infrastructure project in Kenya that they are ready to spend hundreds of millions of dollars to sabotage it.
https://kenyaiforum.co.ke/viewtopic.php?f=2&t=6738/

Like stated above, the global-powers-that-be have an irrational hatred of LAPSSET project. They would do anything to make it fail.

Something very important I have noticed about the global-powers-that-be vis-à-vis the LAPSSET project: They have constantly bad-mouthed the project, expecting Kenya to grow cold feet and abandon it, but that didn’t happen.

Already, 1st Berth of Lamu Port is complete and Berth 2 and 3 are 70% complete.

Apparently, the global-powers-that-be believe that if South Sudan and Ethiopia abandon the project, then it would collapse. Well, it would no longer be called LAPSSET, but that has no effect on the Lamu Port, nor on the supporting infrastructure like roads, electricity etc.

At the moment, both South Sudan and Ethiopia are facing extreme pressure from global-powers-that-be to formally exit from LAPSSET.

Actually - and this the key to success of the project - as suggested above, if most of the information Kenyans receive is managed by Kenyans, withdrawal of South Sudan and Ethiopia from the project would have ZERO effect.

REASON? Kenyans would become aware of lucrative economic activities IN KENYA that would thrive because of the port, and the infinite business opportunities that come with the opening up of another “economic corridor” to augment the Mombasa-Nairobi-Kisumu/Eldoret “economic corridor”.

There are potential MASSIVE economic activities I am aware of that would become reality (that are currently hidden from majority of Kenyans thru’ manipulation of info-flow), but won’t go into that now.

I predict that, if most of the information Kenyans receive is managed by Kenyans, the Lamu Port would be a game changer - it would quickly become the fastest growing port in Africa, with or without South Sudan and Ethiopia involvement.

Now you see why “they” don’t want us to manage our information flow.

Many people reading this would not believe me. However, I have discovered where the problem is; Why all African countries seem to have insurmountable problems.

“They” know if Africans manage their info-flow, their rape of Africa will come to an end.

Information management is the KEY.
Top

“They” created hundreds of “Kenyan” websites, including this pulselive.co.ke, mpasho.co.ke etc. And these websites are given preference by search engines including Google.

“They” believed that now that they controlled Kenyan cyberspace, every Kenyan will believe whatever BS they spew. 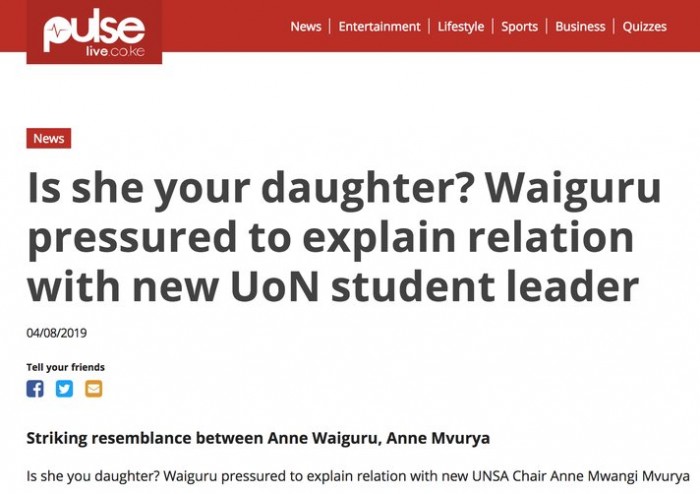 Shocked is an understatement.

I have read a few chapters of The Protocols of the Learned Elders of Zion, and what is happening today, as written on this thread, was planned more than 100 years ago!

Protocol XII, Part 4: “NOT A SINGLE ANNOUNCEMENT WILL REACH THE PUBLIC WITHOUT OUR [the Learned Elders of Zion] CONTROL…”

Some years ago, in Los Angeles, California, US, Mr William O. Ruddick had an epiphany - that it was time for the world to embrace Community Inclusion Currencies (CICs).

That same epiphany directed him to travel 15,972 Kilometres from Los Angeles to Mombasa, Kenya, and start the CIC “innovation”, that would lead to a “decolonised economy” (as his Tweet below shows).

NOTE: Almost all ‘EXPATRIATES’ involved in Kenyan-based Start-Ups in recent years, are people whose background is different from that of the company “they started in Kenya”. Mr Ruddick - the advocate for CICs that would lead to a “decolonised economy” in Africa ONLY - is no exception.

His background is not in tech/ICT.

If you want to understand what is going on, ask Kenyans - real Kenyans - what happened to their Start-Ups.

Even violence has been used to keep Kenyan Start-Ups off the market. Some Kenyans have practically been banished from the internet just for daring to create innovative Start-Ups. I personally know of one Kenyan who was MURDERED because he dared to create an ICT project they viewed as a threat to their interests in Kenya.

I always wondered, what is really going on…

Now, we have the answer.

Most of the Kenyan-based Start-Ups - at least 90% - have been started to offer backup to the racket here, here & here .

For them to serve the intended purpose EFFECTIVELY, they must not have any Kenyan competitor - MONOPOLY IS ENFORCED BY WHATEVER MEANS NECESSARY. 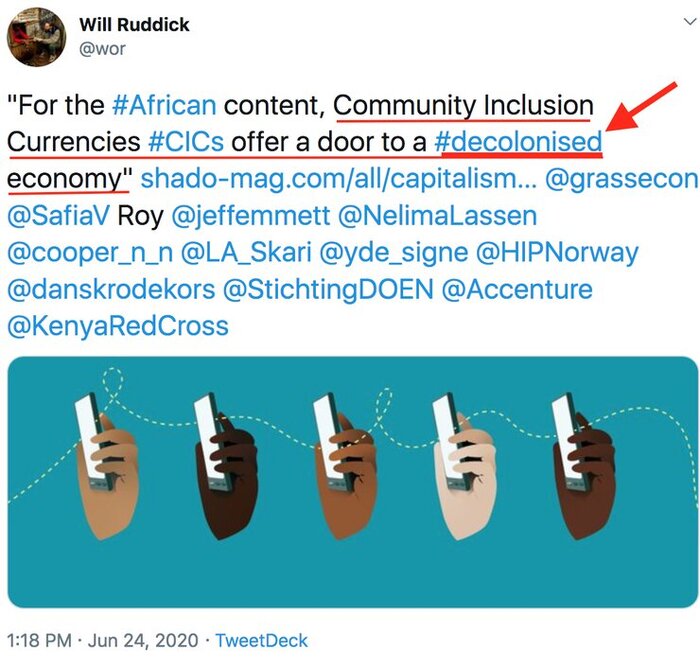