“Ms. Jane Wawira MUGO- a serial Criminal is WANTED by the @DCI_Kenya for various criminal activities including Robbery w/Violence, Personation & Threatening to Kill. A warrant of arrest to that effect was issued by Milimani L/Courts. To be be arrested WHEREVER she’s found.

“The suspect who claims to be a Private Investigator & CEO for Trimo Security Limited has been charged with various offences:- In 2015, She was accused & charged with detaining a man for hours after forcing him to pay Ksh.440,000 to her- vide CR141/184/2015…

“On 12 th Dec. 2016, her employees: Isaac Ndirangu, Noreen Malala & Michael Gita robbed off a man ksh. 90K which he had withdrawn from a Bank after they had introduced themselves as Police Officers- they were carrying a Radio Phone, Handcuffs & a Pistol & were charged with Robbery “Trimo Security CEO, Jane Wawira Mugo…is Kenya’s Sherlock Holmes who smells her suspects from a distance, and leaves no stone unturned even if pursuit means crossing the borders…

“Private investigator Jane Wawira Mugo who has been listed as a wanted criminal by the Directorate of Criminal Investigations (DCI) insists she is not a criminal…Speaking to Citizen TV, Jane said the warrant of arrest issued against her has been fuelled by an investigation case she has been working on that reveals alleged corruption among top security officials in the government…

“Kenya National Commission on Human Rights (KNHCR) is investigating her case. “We hope that once she is arrested the concerns she has raised will be taken care of. We expect that police will follow the law,” said Kamanda Mucheke, the head of department of complaints and investigations at KNHCR.”
citizentv.co.ke/news/why-dci-wants-me-arrested-wanted-detective-jane-wawira-mugo-finally-speaks-out-276292/

Good response Mr Mucheke. If she believes she is innocent, why is she fearing going to court? If we take what people accused of committing crimes say in the press as fact, then no one will ever be charged for committing any crime in Kenya.

The allegations Ms Mugo makes reminds me of a certain court case some years back. The defendant, a businessman, made certain very unusual claims against a certain top politician. The case so excited Kenyans that TVs started airing the court trial live.

The trial became so popular that people were queuing to get a chance to find space in the public gallery.

At the height of the case, the businessman claimed that the top politician shook him down for bribe money, and that he took the money (a few million, cash - can’t recall the exact amount) to him stuffed in a briefcase.

The businessman became so popular that some schools made arrangements for their students to attend the court sessions. The businessman was even photographed signing autographs for kids during court breaks.

Later, the other side was given the opportunity to respond. And, lo and behold, the alleged bribe amount couldn’t fit in a briefcase!

On live TV, the lawyer for the top politician proved, beyond any reasonable doubt, that the businessman was lying.

There was disappointment across the land, because most people who were watching the live proceedings were hoping that the case would see the top politician go down.

Back to Ms Mugo. The claims she has made in the press cannot be taken seriously. She should go to court and present her evidence there.

BTW the longer she remains in hiding, the higher the chance that the DPP would be able to argue successfully in front of a judge that she is likely to abscond if released on bond. 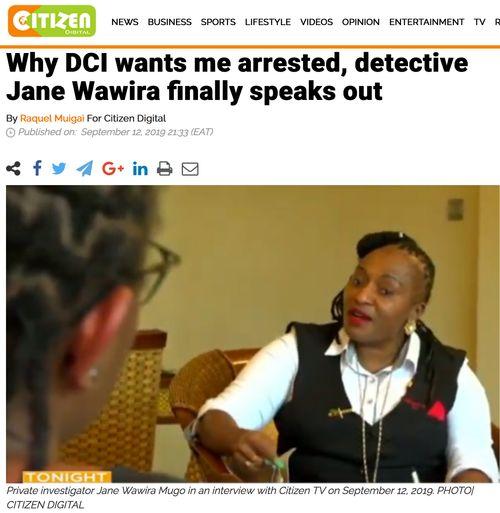 “And in the midst of the fight for the assets scattered in Nairobi and London, there have been accusations of murder, robbery with violence, abduction, and deportation of two British citizens and Nairobi based spy, Jane Wawira Mugo.

In the complex matrix where some of Kenya’s top cops are involved in what would have ordinarily been a family dispute, a detective now believes her life is on the line.”
standardmedia.co.ke/article/2001341982/a-billion-shilling-feud-that-has-put-a-private-detective-s-life-on-the-line

Shame on you standardmedia for taking a suspect’s word as gospel truth. Shame on you again for referring to her as “detective”, yet the DCI has clearly said she has never been a policewoman.

That is why some Kenyans call you Githeri media.

DCI: How come you have not arrested this suspect already? 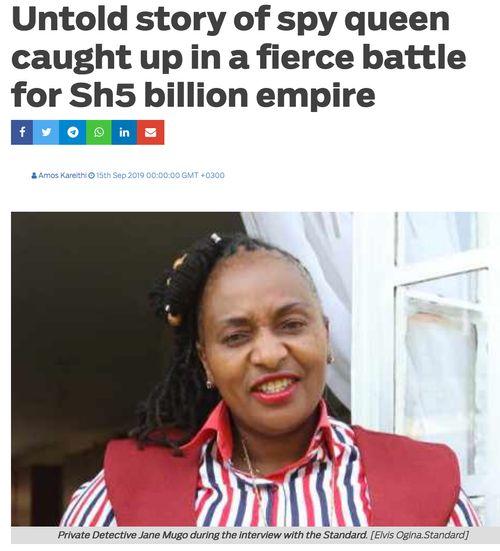