Jane Mugo: Twitter is Blocking Tweets Saying She is Not a Policewoman

Jane Mugo: Twitter is Blocking Tweets Saying She is Not a Policewoman

Nairobi-based Private investigator, Jane Wawira Mugo, was today charged in court with committing violent offences. Citizen TV has written that the court was told “She is one of the police, undercover, she can’t escape” (citizentv.co.ke/news/private-detective-jane-mugo-freed-on-ksh-300k-cash-bail-276858/).

This caught my eye because DCI has said Ms Mugo is not, and has never been, a policewoman. I tweeted about this, and my tweet was hidden from view. I tweeted again, same result.

Therefore, Twitter is “protecting Ms Mugo’s reputation”. What does this mean?

Recall: The spokesperson of Kenya’s president said that the president was bullied out of Twitter. Therefore, Twitter cannot protect the Kenyan president, but it is protecting Ms Mugo.

This means that, it is in the interest of the most powerful people in the world, that Kenyans believe Ms Mugo works for Kenya police. Why?

I believe I know why. But, bizarrely enough, Ms Mugo, most likely, does not even know that the most powerful people in the world have been promoting her profile in the media and online, and are behind the attempt to make it appear like she is being framed by DCI.

My advice to Ms Mugo is this: You are caught in plots that are too complicated for you to comprehend. It is in your interest to cooperate with the DCI 100%. This is because, the shadowy people you worked with, would want to kill you and use the media and social media to claim the government did it.

Go to the DCI and tell them everything you know.

NB: I suspect that the shadowy people Ms Mugo has worked for in the past, are the ones who have convinced her to treat DCI as the enemy, so that she does not divulge anything about them (shadowy people).

Ms Mugo: These shadowy characters are extremely dangerous people, and if you trust them, they will soon get rid of you, you know, for ever, and lay the blame squarely on Kenyan police. 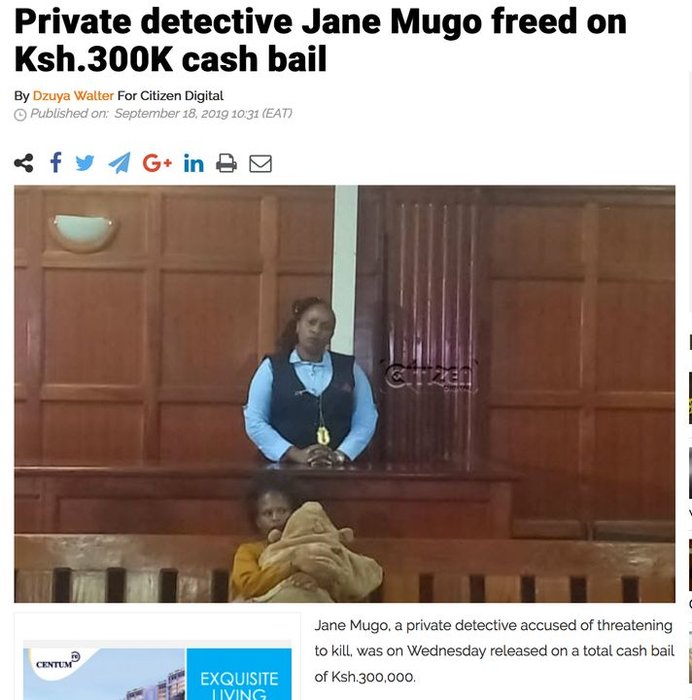