I have never met you and you do not know me. What I know about you is what I have read in the media, social media, or watched on TV about you.

A few years ago, I participated in an online social media debate regarding corruption allegations against you. Like most Kenyans, I had believed those allegations and I said as much.

Up to date - several years later - I have never received as many “LIKES” as I did on that day when I associated you with corruption.

That is the day I realised that you have powerful enemies.

On that day, I started believing that you are not corrupt - Because I knew that certain powerful non-African actors would never let me have many “likes”, unless what I had said dovetailed with their interests.

And I knew (and still know) that their interests are anti-Kenya.

To cut long story short, you - Anne Waiguru - had to be a Kenyan patriot for these non-African actors to hate you.

That is a fact.

Since then, I have viewed Governor Anne Waiguru as a Kenyan patriot.

I will now write about another Kenyan, because it is necessary for Kenyans to understand that the world is not as straight-forward as they think. Since I only want to explain a certain phenomenon, and do not want to embarrass the concerned party, I will write in such a way that I don’t expose the person I am talking about.

There is a certain Kenyan who has been living abroad for quite some time. This person was doing so well abroad - even got featured on major international media - that the sky appeared to be the limit.

Then suddenly, the person did something extremely stupid and self-sabotaging. An action that meant that the person would most likely never rise any further - either abroad, or in Kenya. Yet, the self-sabotaging action did not appear to grant the person any benefit.

How can you deliberately sabotage yourself?

The only explanation I could think of was this (And I know “they” use this tactic whenever necessary):

Powerful people, who run the world from the shadows, did not want this Kenyan to rise any further. They sent one of their people to befriend this Kenyan, to act as a close friend and confidant.

This close friend/confidant, who in reality was a mole, planted by “them” to bring the successful Kenyan down, very subtly misadvised and misguided the Kenyan to make self-sabotaging decisions.

Example about how this can happen without someone knowing he/she is being deliberately led astray by his/her planted “close friend/confidant” (I will use sports to explain my point): You are involved in a certain sport, say athletics.

You practice and practice, but all you manage is a bronze medal at the Africa Championships or Olympics. However, you are young, and have potential to maybe get Gold in future.

Your adviser/manager tells you: “All these great athletes winning Gold, all of them take performance enhancing drugs…these drugs cannot be detected by any test…”

The promising young athlete follows the manager’s advice. He takes the drugs, wins a few races, is soon found to have taken the drugs, and is banned for years. His future is ruined.

Unbeknown to the athlete, the manager was planted by a foreign entity that feared he would become a great athlete in future, and ruin the entities’ preferred athletes’ chances of winning same competition in future.

There are some really bad people in this world.

NOTE: A Kenyan might argue that he/she is so intelligent, that “they” cannot plant a mole to act as their confidant.

My Answer: It is not about intelligence. It is about knowing that such people exist. If you do not know that these powerful characters who operate in the shadows exist, then they are capable of planting a mole to act as your confidant, regardless of how intelligent you are.

(One of these days, I will write a detailed article about how “they” plant their moles to act as close friends/advisors/confidants of their targets, without being discovered)


The County Assembly of Kirinyaga had, on March 11, passed a motion compelling Waiguru to release the land-ownership document to KEMRI with immediate effect.

Waiguru, nonetheless, stood her ground, saying she wasn’t going to release the title deed until KEMRI accepted her terms and conditions.

As a neutral person, reading about the KEMRI-Kirinyaga controversy, it is obvious that, in this matter, Governor Waiguru has acted as if Kirinyaga County is her personal property. She has made very PETTY demands regarding the project.

There are government facilities all over the country. Local leaders do not go around demanding they sign documents about who will be hired…it is common sense.

Government-owned (public) schools hire mostly local sub-ordinate staff, even though they have not signed a document about the percentage of locals to be hired. It is common sense.

Given her stellar past, the only explanation appears to be that “they” have planted a mole to misadvise and sabotage her.

As the Tweet below asks, will Governor Waiguru identify and get rid of this mole before it is too late? 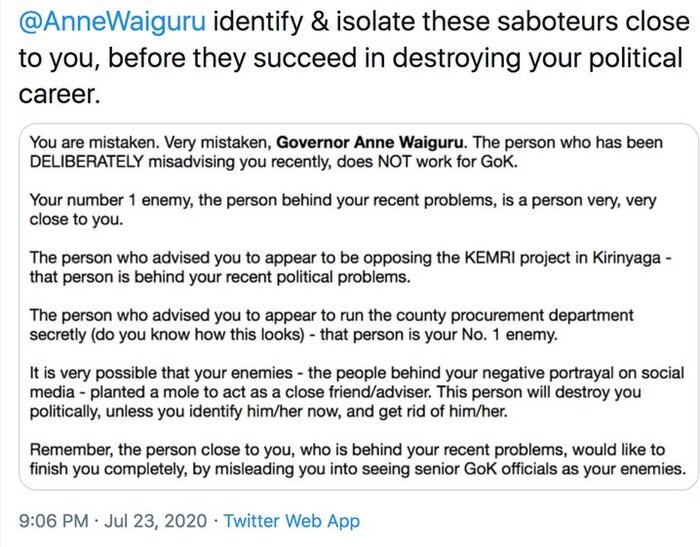