UPDATE 10 June: In the provided English link to the story above http://malindikenya.net/en/articles/new ... mano-.html I have used several browsers, and each time, there is no story accompanying the picture of the ambassador.

NOTE: There was no accompanying link in the earlier English version, as shown in the post above. Will someone read this post and update their English version of the website? Unfortunately, even if that was done now, the story will already be 1 week late, therefore, no longer news. 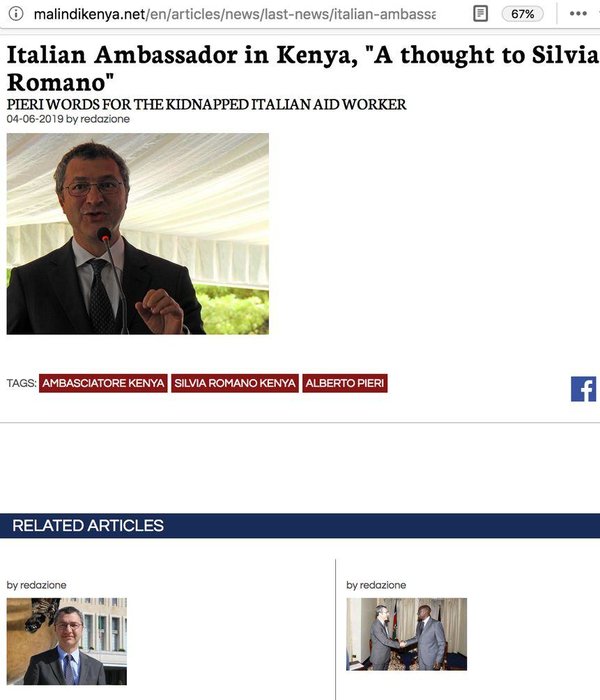 Therefore, the question remains: Who is intimidating both ITALY & KENYA governments not to solve this case of the kidnapping of Silvia Romano?

“It's been almost seven months from when Silvia Romano was kidnapped. Angelo Ferrari, journalist of the Agi, has published an e-book in which he traces, in the form of a daily journal the events of these long 216 days. Not only to let you know everything that has happened so far. Not only to give a new shock “to the conscience of’ public opinion”. But also because the moment of the longed-for liberation, is close.”

““Silvia, Diary of an abduction” will soon be printed. The author and the publisher announce now that the proceeds will be donated to charity.”
http://m.famigliacristiana.it/articolo/ ... uestro.htm

The question remains: Why the cover-up about Silvia Romano kidnapping? Why the deliberate avoidance of having articles about her “alleged” abduction also appear in English?

Who is pulling powerful strings behind the scenes to have this thread censored by the search engines?
Top

https://www.the-star.co.ke/counties/coa ... operation/
Another cock and bull story about Silvia Romano. At least it is in English, though you wouldn’t know the article exists…

Searching for recent articles about Silvia Romano written in English is like looking for a needle in a haystack.

The article above in the “Star” looks odd, like it has been translated from another language. It does nothing to dispel the notion that Silvia Romano is not who she is said to be.

For instance, the article says that the investigation has been handed over to the Carabinieri, yet does not interview anyone from the Carabinieri, or even the Italian Ambassador (if they needed help with contacts etc.).

We are talking about an Italian citizen kidnapped in Kenya! This is not a small matter, especially since she has not yet been found more than 7 months after she was kidnapped, and no one has claimed responsibility for her kidnapping.

NOTE: “The Star” is one of the major newspapers in Kenya. On their online version, most articles have many comments, yet the article above on Sylvia Romano has ZERO comments.

I personally submitted a comment on the article and it was not published.

Why is everyone so jittery about the Sylvia Romano case? Detectives, journalists, diplomats, politicians, Kenyans, Italians…everyone is afraid about discussing SYLIVA ROMANO. Why?
Top 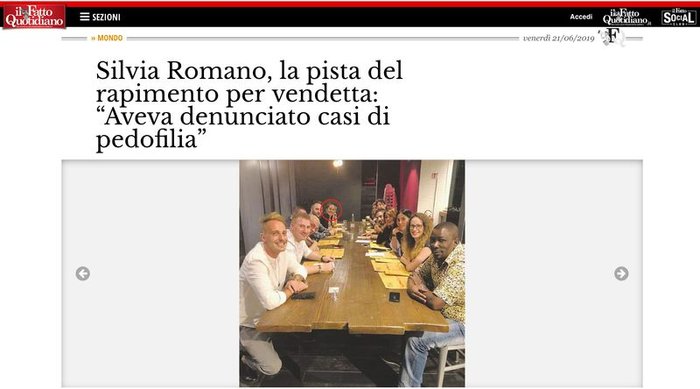 HEADLINE: Silvia Romano, her kidnapping was for revenge: “She had reported cases of pedophilia”

According to the online translator, the article is trying to pin Silvia’s kidnapping on David Ciarrapica ( allegedly an Italian living in Kenya), and a Kenyan, Rama Hamisi Bindo.
https://www.ilfattoquotidiano.it/in-edi ... a/5271399/

As far as we know, these could just be fictitious characters.

For this article to be taken seriously, at the very least, they should have an English version online so that Kenyans can read it and provide clues as to the whereabouts of the named persons.

For the first time since I started posting on this thread, I cannot find any relevant recent article about Silvia Romano. None in English, and none in Italian. Yes, I now know a few words of Italian!

Where is Silvia Romano? 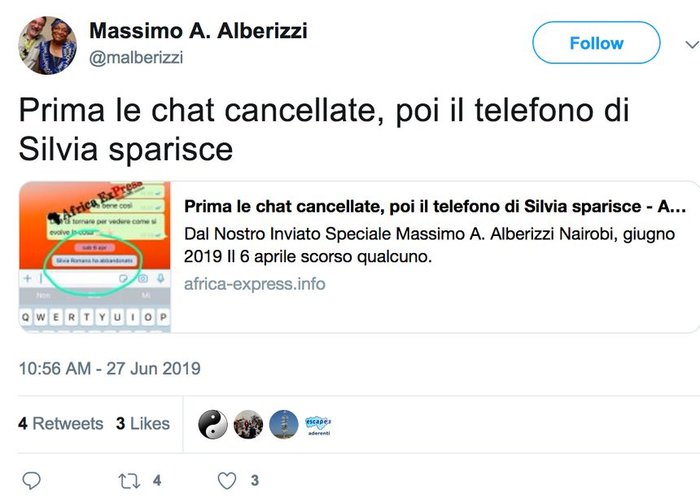 It would help to solve the case of missing Silvia Romano if you interviewed Mr Massimo A. Alberizzi. According to his Twitter account, Mr Alberizzi is the Corriere della Sera African correspondent & director at Africa Express.

In the matter of Silvia Romano, Mr Alberizzi doth protest too much, methinks.
Top 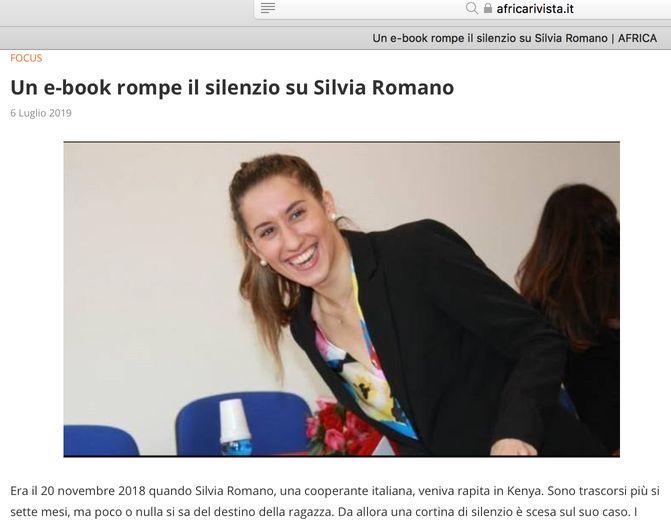 Headline: An e-book breaks the silence on Silvia Romano

To lift the veil of silence has come "Silvia. Diary of an abduction", a e-book published by Angelo “Mario Puzo” Ferrari, in the form of a daily diary, recounts the events of these long months. Not only the journalist reconstructs, in a serious and soft-spoken, everything that has happened so far. The goal is to "give a new shock to the conscience of the public opinion and stimulate political action and diplomatic, so that the liberation of Silvia is near…”
https://www.africarivista.it/un-e-book- ... no/143116/

Nothing new in this article. Still waiting for a major media house to publish an article about Silvia Romano in English.
Top 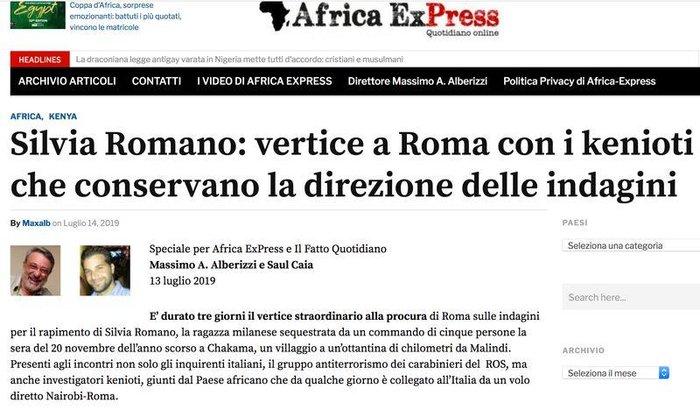 In this this article https://www.africa-express.info/2019/07 ... -indagini/ & linked tweet malberizzi/status/1150177719503720448, Mr Massimo A. Alberizzi is assuring the good people of Italy that Kenya’s Director of Public Prosecutions Noordin Haji, and Director of Criminal Investigations George Kinoti, had gone to Italy because of the Silvia Romano case.

But, as you can see from Kenyan media below, that is not true at all. Mr Haji and Mr Kinoti have clearly said that they have gone to Italy to follow up on an unrelated corruption scandal.

This is how the visit to Italy by Director of Public Prosecutions Noordin Haji, and Director of Criminal Investigations George Kinoti is being reported in Kenya:

DPP, DCI off to Italy for dams missing billions
https://www.standardmedia.co.ke/article/2001333403/

Mr Alberizzi, who are you covering for? Israeli Mossad? Kenya’s DCI? Italy’s Carabinieri?

Speak the truth, and it will set you free, sir!
Top

HEADLINE: “14 July 2019. Bad governance, exploitation and corruption, this is why Africa does not take off”
africa-express.info/2019/07/13/malgoverno-sfruttamento-e-corruzione-ecco-perche-il-ricco-continente-africano-non-decolla/
BY Franco Nofori; @FrancoKronos1

In this article, Africa Express, through Mr Franco Nofori, has decided to slander all Africans as lazy, directionless and corrupt, hence why Africa is in such misery. Yet, as you can see from this thread, Africa is being ceaselessly sabotaged by entities based in Europe.

NB: I contacted Mr Alberizzi (Editor of Africa Express ) about Ms Silvia Romano, but he did not reply. That says a lot about Ms Romano & Mr Alberizzi.
Top 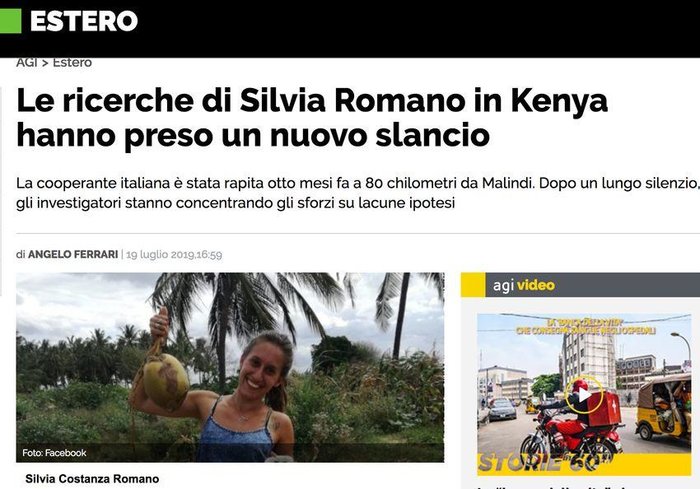 Translation: “ANGELO FERRARI 19 July 2019,16:59: The search of Silvia Romano in Kenya have taken a new impetus…

“The latest news, according to what emerged during a meeting between the Italian authorities and those of Kenya that took place in Rome on the 15th of July, they spoke of the fact that Silvia Romano was alive on Christmas day. A certainty [ABSOLUTELY NO DOUBTING THIS FACT]. The other catch is that after that date, probably around the middle of January, the young Italian has gone out of hand, and that the new group of kidnappers, probably, is known to the investigators.”
https://www.agi.it/estero/silvia_romano ... 019-07-19/
Top

Translation from Italian: “30-07-2019 by Freddie del Curatolo; Silvia Romano: [Director of Pubic Prosecutions] has started the process to try 2 of the gang [that kidnapped her]). THE FIRST HEARING TOOK PLACE UNEXPECTEDLY IN CHAKAMA [Kilifi County]”

“Trial of the 2 men was held in an improvised courtroom in the local elementary school [in Chakama, Kilifi County]…

“The decision seems to have been taken to give the opportunity to the Magistrate to be able to listen to all the witnesses of that tragic evening [kidnapping of Silvia in November 2018], including those who had been wounded by the first shots of the AK-47 rifle, before breaking into the room that housed Silvia Romano.

“Many of them [witnesses], due to lack of resources, would not have had the opportunity to go to Nairobi, or Malindi [the nearest high court], so the court opted to bring the two accused to Chakama…”
http://www.malindikenya.net/articoli/no ... banda.html

A court trial of people accused of kidnapping a foreign citizen would be big news in Kenya, especially since the kidnapped person is still missing. How come no Kenyan seems to know about this “court trial”?

Conclusion: Something is not right about this story from Malindi.Net.
Top

I have noticed that Africa Express have a new article about this case, stating that a trial of suspects in the kidnapping of Silvia Romano is currently ongoing (SUSPECTS WERE IN COURT TODAY). Their story is accompanied by videos dated today. They have also interviewed a Mr Okwemba of Standard newspaper (one of the main newspapers in Kenya).

I have searched for the Silvia Romano story in the Standard newspaper. No recent news article about her. I have also searched KTN website (KTN is owned by the Standard, and is a major TV station in Kenya). As the attached image shows, ZERO results on Silvia Romano on KTN.

The good thing with the Africa Express article is that, at least they have given us the names of the alleged suspects in the kidnapping of Silvia Romano:

“Began the parade of witnesses to the trial for the kidnapping of Silvia Romano. Unfortunately, the hearing shall be held in the Swahili language and it is therefore difficult, even incomprehensible, to know what you say.

At the bar there are two suspects: Moses Luari Chende, a Kenyan Giriama, the ethnic group that lives on the coast of the Country, and Abdulla Gababa Wari, a Kenyan Somali (the one accused of having organized the kidnapping)”

“In the hall of judgement , were shown the bikes that the kidnappers used to carry away Silvia. The judge is Mrs. Dr. Julie Oseko. Also the public prosecution is entrusted to a woman, Alice Mathangani.”
africa-express.info/2019/07/30/cominciato-il-processo-per-il-rapimento-di-silvia-romano-2-kenioti-alla-sbarra/

I will keep following this issue, and will report here if, and when, a Kenyan media reports about the “court case”. I hope its not some local bike thieves being shown in the video…

NB: I have done an online search for Moses Luari Chende and Abdulla Gababa Wari, and the only hits I am getting are either from Africa Express, or other Italian language sites, apparently quoting Africa Express. Certainly ZERO English results for the names.

How can there be a court trial in Kenya, for a major crime, with Kenyan suspects, yet no Kenyan media - or any Kenyan for that matter - is reporting about it?
Top
Post Reply
66 posts