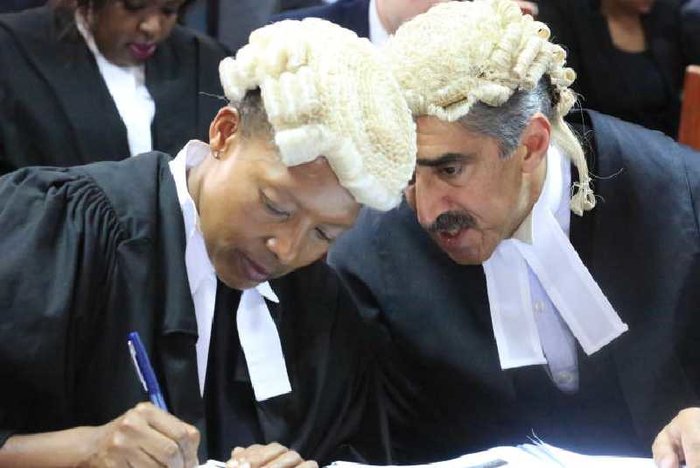 “According to the Deputy Director of Public Prosecutions, Ms Dorcas Oduor, senior counsels James Orengo and Okong'o Omogeni are members of Senate Legal Committee, which has an oversight role over the Director of Public Prosecutions (DPP) and the Attorney General and have confidential information relating to the case and Khawar Qureshi, Queen’s Counsel appointment which came to their knowledge.

“We will be seeking an interpretation on how the law of privileges should be applied because the two senators cannot sit in a committee that grilled the DPP over Prof Qureshi’s appointment and come to court the next day seeking to quash his appointment,” said Oduor.

Summary of facts about this case:

1. Deputy Chief Justice Philomena Mwilu is the 2nd senior-most judge in Kenya. She is accused of engaging in fraud and corruption. She is allied to the foreign-funded ’civil society’/NGO movement in Kenya. Justice Mwilu and her allies claim that she should not be charged because of her position i.e. she is above the law. The prosecutor does not accept that claim.

2. Philomena Mwilu has been a spouse to Amos Wako, former Attorney General of Kenya, since 1997. https://en.wikipedia.org/wiki/Philomena_Mbete_Mwilu

“Lady Justice Mwilu is now known as Wako’s de facto second wife…Wako is barred for life from ever setting foot in the US.” https://www.sde.co.ke/thenairobian/arti ... mena-mwilu

3. Justice Mwilu’s husband, Mr Wako, is a senator, as is her counsel Mr Orengo and Prof Omogeni. Mr Wako, Mr Orengo and Mr Omogeni are all members of the Senate Legal Committee. As stated above, the committee has oversight role over the Director of Public Prosecutions (DPP). All 3 are also closely allied to the foreign-funded ’civil society’/NGO movement in Kenya.

4. Corruption is identified as Kenya’s no.1 problem, and a day does not pass without the foreign-funded ’civil society’/NGO movement in Kenya criticising the government for failure to slay the corruption dragon(correctly). They then shamelessly declare, by their actions, that the government is only allowed to prosecute the corrupt people they hate, but never touch their corrupt allies.

5. Director of Public Prosecutions, Mr Noordin Haji, has hired Prof Qureshi, QC, from the UK. Maybe he did this because this is a very high profile case, and any local counsel could be accused of bias.

If Kenya’s media had serious journalists, by now they would have written about how the fight against corruption is being sabotaged by cunning crooks in parliament, senate and the legal profession.

Look at the following article in the ‘Nation’ - “Lawyers, DPP clash in court as NHIF fraud suspects charged”: https://www.nation.co.ke/news/NHIF-case ... index.html

“Defence lawyers Tom Ojienda…” What caught my attention is the fact that Prof Ojienda, a member of Judicial Service Commission (JSC), is a defence lawyer in the multibillion NHIF corruption case.

The JSC is established under Article 171 of the Constitution of Kenya. The Key functions of the JSC are:

1. Recommend individuals to the President for appointment as judges
2. Review and recommend the conditions of service of judges and judicial officers, other than their remuneration and the staff of the Judiciary
3. Appoint, receive complaints against, investigate and remove from office or otherwise discipline registrars, magistrates, other judicial officers and other staff of the Judiciary, in the manner prescribed by an Act of Parliament
https://en.wikipedia.org/wiki/Judicial_ ... on_(Kenya)

It is not surprising that the suspects are out on very lenient bond terms.

Solution: Make the following changes to the law urgently:

1. A practicing advocate cannot also be a member of JSC.

2. Once a lawyer becomes a member of parliament or senate, their registration as a lawyer stands suspended(or some other technical jargon, but you get the drift). If you are an MP/Senator, then you MUST not be allowed to represent any entity in court.
Top

17 December 2018: “The government has suffered a setback in the implementation of the gazette notice ordering the fresh vetting of licensed gun owners. This follows Justice John Mativo's decision suspending the notice pending the hearing and determination of a case filed by the by the National Gun Owners Association.”
https://www.the-star.co.ke/news/2018/12 ... s_c1867289


5 December 2018: “All civilian firearms holders must appear in person before the Firearms Licensing Board for mandatory vetting from December 17, Interior CS Fred Matiang'i has said. In a statement on Wednesday, Matiang'i said the board chaired by Charles Mwongera will begin a 90-day verification of all firearms certificates.”
https://www.the-star.co.ke/news/2018/12 ... 7_c1861322

In Kenya, you can be accused of murder, file a counter argument stating that the charges are a result of politics or malice, and the judge will set you free as your allegations are argued in court.
Top

The Judicial Service Commission (JSC) consists of the following 11 members:

1. The Chief Justice, who shall be the chairperson of the Commission;

4. One High Court judge and one magistrate, one a woman and one a man, elected by the members of the association of judges and magistrates;

6. Two advocates, one a woman and one a man, each of whom has at least fifteen years’ experience, elected by the members of the statutory body responsible for the professional regulation of advocates;

7. One person nominated by the Public Service Commission; and

8. One woman and one man to represent the public, not being lawyers, appointed by the President with the approval of the National Assembly.
https://www.judiciary.go.ke/leadership/ ... ommission/

No. 6 above should never have been included. It is the major source of the tragic state of Kenyan judiciary currently. Maybe the reason why it was accepted way back in 2010 was that the constitution change was a ‘shotgun event’(a result of 2007/2008 political crisis).

Many people now recognise that the constitution needs to undergo major changes. Hopefully, when that happens, the inclusion of practising advocates in JSC will be done away with.
Top

Haji says senators Orengo and Omogeni participated in a sitting of the Senate Committee on Justice, Legal Affairs and Human Rights where a petition against Queens Counsel Khawar Qureshi was raised.

He argues that the two senators raised questions regarding the engagement of Qureshi to represent the DPP in the Mwilu case on December 5 and yet appeared in court on behalf of Mwilu the following day.

"The DPP was asked a number of questions regarding the engagement of Khawar Qureshi to act for and on behalf of DPP in the instant matter...Orengo and Omogeni raised several questions...this was a clear conflict of interest," the application reads in part. 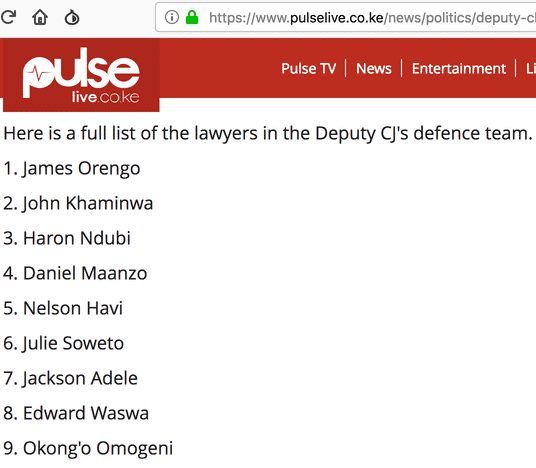 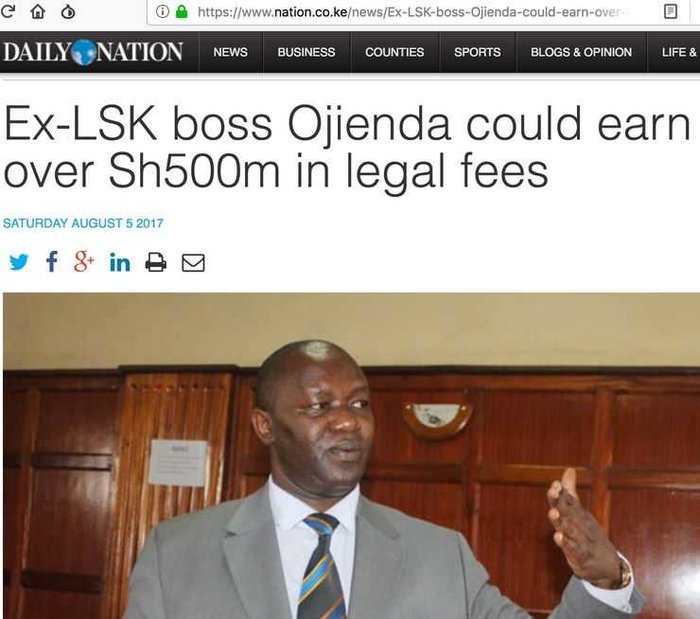 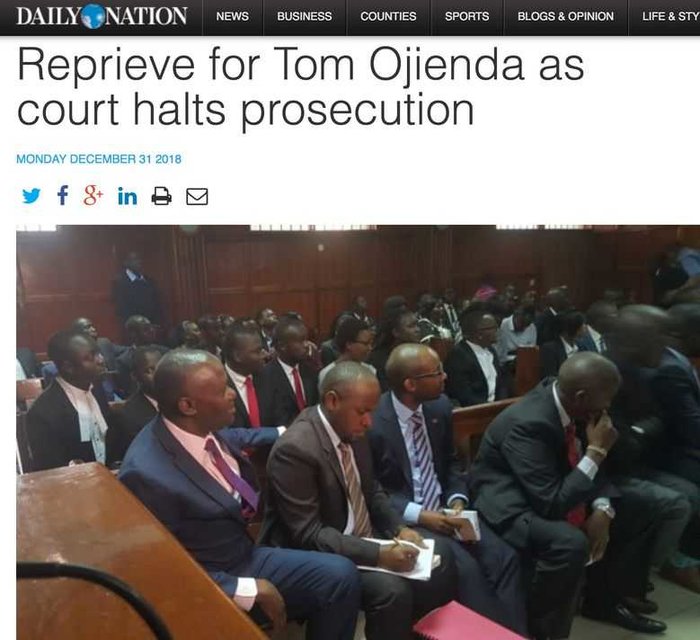