- Petition 418: Justice Wilfrida Okwany compelled the KRA to issue Tom Ojienda with a compliance certificate for 2018/19 despite investigations on tax compliance. This order was issued on December 4.

- Petition 464: Justice Chacha Mwita issued an order that prevented the commission from summoning, arresting and charging Prof Ojienda over the use of the government vehicle he was assigned.

Appeal Court judges Roselyn Nambuye and Sankale ole Kantai, in a case pitting senior lawyer Tom Ojienda against the EACC, decreed that in the event an investigative body wanted to probe a person, it must first issue summons and give the suspect a chance to furnish them with the required information before deciding whether to press charges or not.
https://www.standardmedia.co.ke/article ... n-searches

In simple language, these Appeal Court judges ruled that, if the police are investigating an armed robber, they must first inform him that they will go to conduct a search in his house at a certain date in the future.


One of Mr Ojienda’s lawyers Mr Nelson Havi, told the Nation that there is a scheme taking shape to lock out people perceived to be hostile to the government from taking up seats at the JSC, especially with several top judges set for retirement.”
https://www.nation.co.ke/news/My-arrest ... index.html 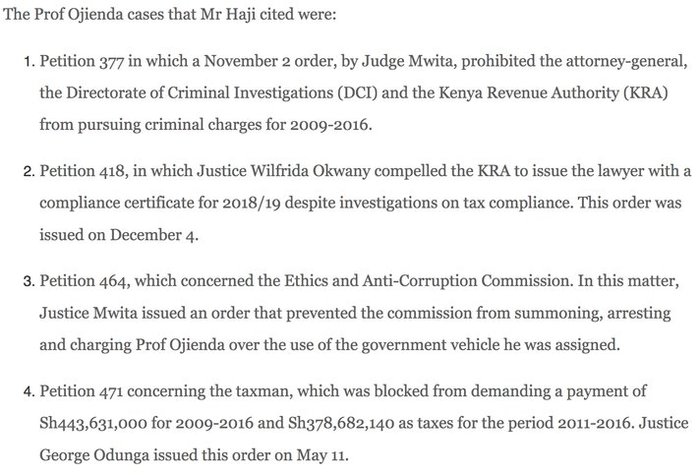 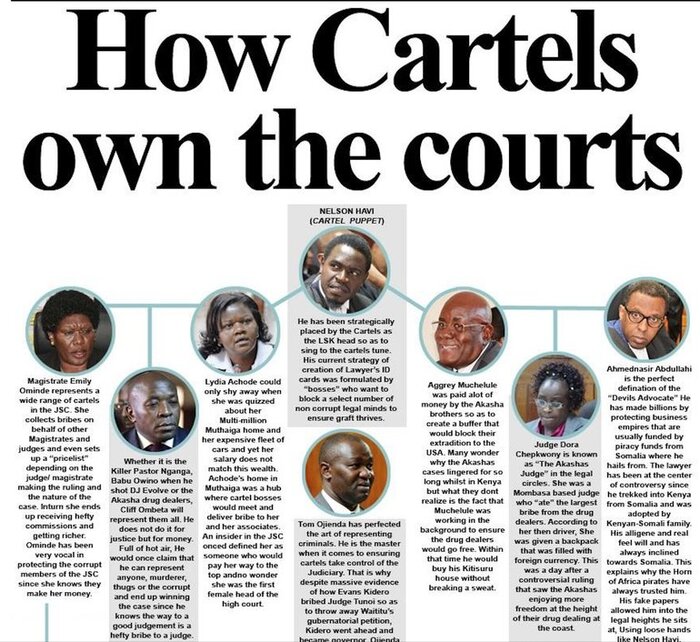 The Law Society of Kenya (LSK) wants to de-register the Attorney General (AG) and Solicitor General (SG), meaning that the 2 senior GoK officials will not be legally allowed to practice law in Kenya.


Notice of motion by the @lawsocietykenya Council on the expulsion of Mr. Paul Kihara Kariuki, Attorney General and Mr. Kennedy Nyabuti Ogeto, Solicitor General from membership of the Law Society of Kenya.”


Unlike in some countries e.g. the US, where there are several bodies that register/de-register lawyers, in Kenya the LSK has monopoly. Therefore, if the LSK is hijacked by corrupt lawyers, as has already happened, then they can seriously sabotage the country.

Technically, the disbarring of the AG & SG might not be a big deal. They generally do not go to court. They send their juniors to represent them in court. Also, GoK can ignore the fact that they have been disbarred, and they would continue serving the people of Kenya as they already do.

If LSK was acting on its own, their move to deregister AG & SG would be laughable. However, Deputy President William Ruto & his allies are siding with LSK. So is the Civil Society.

After they disbar AG & SG, they would then intimidate all lawyers working under the two officials - Anyone representing AG/SG in court would be disbarred. This is a serious threat to young lawyers working in the 2 offices.

Therefore, if LSK - fired up by the backing from DP Ruto, Civil Society & Global Deep State - is not stopped, they would eventually achieve the ultimate prize, the TOPPLING of President Uhuru Kenyatta’s government.

GoK should therefore react to the LSK threat, not as a legal issue only, but also as a political and NATIONAL SECURITY issue. GoK MUST win against LSK. GoK owes the win to the thousands of Kenyans who died fighting for independence.

1. (I am no lawyer, so I don’t know whether this is possible) Create another body that registers/deregisters lawyers, so that lawyers can practice law if registered by LSK or this other body.

Example: This new lawyers’ body would be representing Nairobi Metropolitan Region, like there are State Bars in some countries.

2. If the above cannot be done easily or quickly enough, then GoK, considering that this is a NATIONAL SECURITY issue, will resolve that, as long as AG & SG are disbarred, then the LSK officials who made that decision cannot also practice law anywhere in Kenya.

GoK has the resources to ensure this option is implemented.

There are many vultures circling overhead, waiting for GoK to show weakness, and they will go for the kill.