“They” have come to believe that the chances of their preferred person to become President of Kenya are getting less, not increasing.

That is why “they” are quietly laying the ground work for their PLAN B - a “people-driven revolution” in Kenya, through these shadowy Expatriate “Tech Entrepreneurs”.

One of these projects is by “Grassroots Economics”, through the so-called Community Inclusion Currencies (CICs).

Now you know why these projects, including the so-called CICs and other similar shadowy projects “Grassroots Economics” and company are involved in, are so URGENT that, as you can see in the attached image, they cannot wait for Covid-19 epidemic to slow down before engaging the public.


GoK should order all these shadowy expatriate-led “TECH” organisations to choose either:
1. Register as a humanitarian organisation/NGO and offer Kenyans only recognized money or TANGIBLE goods, or
2. Register as a credit/finance agency, and register at CBK like any other Kenyan credit agency.

There MUST be no room for these shenanigans where someone is given a ‘voucher’ by these ‘donors’, a ‘voucher’ that cannot buy any goods in any supermarket. Most importantly, THE ‘TECH EXPATRIATES’ BEHIND THIS SCAM DO NOT USE THESE ‘VOUCHERS’ IN THEIR OWN COUNTRIES!

What is the agenda? The agenda of these suspicious characters is not good anyway you look at it…

If an expatriate ‘TECH ENTREPRENEUR’/‘donor’ is using or planning to use these block-chain backed systems (or some other tech jargon), to be allowed to operate in Kenya, they must show EVIDENCE, that:

Therefore, in the case of ‘Grassroots Economics’, for them to be allowed to partner with Kenya Red Cross, they must have shown evidence that:

1. They have been operating in either the US or Denmark, and have done so for at least 1 year.
2. If the target in Kenya is 1,000 people, they must prove they are serving at least 100,000 people in US/Denmark with same ‘technology’.

To understand that “they” have abnormal interest in Kenya, look at the attached graphic about Ethiopia-based Danish Red Cross official called Adam Bornstein.

If you read his tweets, you would be very surprised to learn that he is based in Ethiopia.

Mr Bornstein is always full of praise for the CICs introduced in Kenya by Expatriate “Tech Entrepreneurs” working with ‘Grassroots Economics’.

Question: If these projects as so good and harmless, why isn’t ‘Grassroots Economics’/Adam Bornstein introducing them in Ethiopia? Could it be because Ethiopian government cannot allow such projects on their soil?

Kenya security agencies: I hope you are investigating these agencies before they do irreparable damage to Kenya stability. 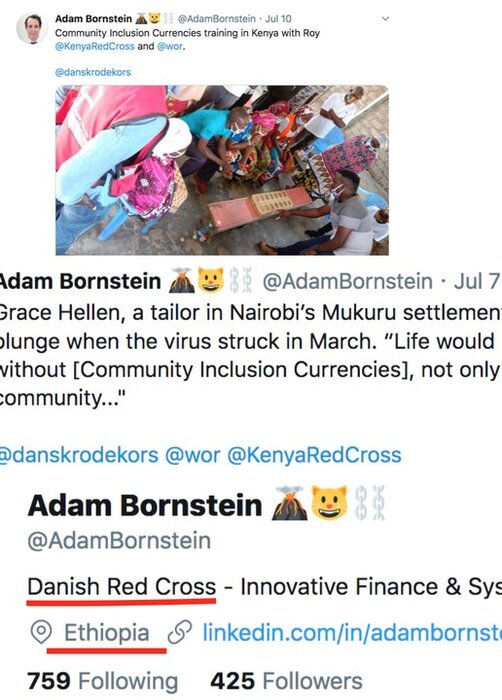 Someone might argue that these Expatriate “Tech Entrepreneurs” operating in Kenya that I am labelling as dangerous are quite harmless. Furthermore, even if they were planning to do so something bad, they won’t do it, knowing that they might be found out…

Well, that argument is very wrong. And I will explain why.

I am ware that there are some “entities” who are desperate to conquer Kenya. All they need is an opportunity to unleash an event that would trigger big-scale inter-communal violence, and all else will fall into place.

August 13, 1997: Six policemen were killed when local raiders armed with traditional weapons and guns rampaged through Likoni, Mombasa. A police station and outpost were destroyed, along with many market stalls and offices.

Many non-local Kenyans were either killed or maimed, as the raiders targeted the Luo, Luhya, Kamba and Kikuyu communities. It was estimated that ten police officers and thirty-seven raiders were killed in the clashes…Around 100,000 people were displaced from their homes.
https://kenyaiforum.co.ke/viewtopic.php?f=2&t=14149/

NOTE: The above incidences that resulted in the killing of hundreds, and displacement of hundreds of thousands of innocent Kenyans from their homes within a few days, occurred before the era of social media in Kenya.

They occurred before most Kenyans had internet-connected mobile phones.

If the same conditions as during the inter-tribal violence incidences above were to be replicated today, then the casualties could easily be 10 times higher because it is easier to coordinate attacks, spread fake news and propaganda etc.

1. How can entities that are well known plot how to trigger major violence in Kenya? Won’t they fear subsequent consequences?

2. Why should these entities be barred from doing what they are doing in Kenya, yet “they haven’t done anything wrong”?

Answer: Because, once they do something wrong, it would be too late to save Kenya from being destroyed completely.

This is what would likely happen: Rumours spread (deliberately spread, by “Russians who have hacked into the ‘Grassroots Economics’ & associates Kenyan clients’ phones”) about some communities being targeted and killed in a particular slum.

Updates by the minute, give minute by minute movements of the “killing gangs”.

By the time it is found that the initial Killings/displacements were based on fake news, hundreds of thousands will already be displaced, and possibly dozens dead.

Unlike in 1997 Likoni violence, or 2007/8 violence that lasted for days, this violence could only last a few hours, but with similar number of victims, because of current ease of communication.

Calls for “political settlements” will follow. BBI will be dead.

“Civil society” and “their” favourite Kenyan politician will be in agreement that what Kenya needs is “implementation” of 2010 Constitution.

Guess who is favoured by such a stand? The Kenya Corruption Movement.

Kenya would be KAPUT. Just because a few cunning, slimy characters were allowed to do something in Kenya, that they wouldn’t dare do in their own countries.