I believe renewable energy like wind & solar is much preferable to coal, and that is why big companies around the world are using nuclear and coal power to build wind turbines and solar panels.

Electric cars do not pollute the environment, and are therefore much preferable to diesel/petrol engine cars. That is why big companies around the world are using nuclear and coal power to build and charge the cars.

Analogy: If you tell a starving man that he shouldn’t eat the food in front of him because it might have some negative effect on him, he will ignore you, eat to his satisfaction, and then tell you, “we can talk now. What were you saying?”

1. Kenya urgently needs coal-powered plants to generate at least 3000 MW (stable, cheap power) by 2025 if the critical problem of unemployment is to be solved.

2. A Kenyan will oppose coal, and at the same time complain SGR is not electrified, and that there are no jobs.

3. Olkaria Geothermal Power Station has managed to produce 185 MW after more than 30 years of investment and upgrades. https://en.wikipedia.org/wiki/Olkaria_I ... er_Station

4. Foreign entities fund NGOs in Kenya to oppose coal power plants, yet they have never funded a single renewable power plant (by funding, I don’t mean a loan, I mean a grant).

5. About coal and health. The toothpastes we use, the processed oils, butter, bread and other processed foods we eat, and factory made medicine we take, are all bad for our health. Or, why do you think there are so many cancer cases compared to 100 years ago?

These recent health problems are caused by “development” or modernity. If we could all agree to live life like our ancestors did 1,000 years ago, these health problems would cease.

But life expectancy would still go down because many more people would be dying during childbirth, due to common injuries, dysentery, consumption etc.

Kenya should immediately start coal-powered electricity generation, and also invest in renewable power production so that in future, the coal plants should be getting decommissioned and replaced by renewables/nuclear.
Top

When it comes to the proposed Lamu Coal-powered electricity generating plant, or any other power plant in Kenya, the only important factors to consider are:

1. The contractors/owners MUST pass the security test.
2. It should not be close to a populated area (at least 20 km away);
3. It should not sit on prime agricultural land;
4. It must be classified as safe by NEMA;

I hope the Lamu Coal plant passes no.1 test above, else, it must wait till it passes that test. I believe it passes nos 2-4. Therefore, if no.1 is true, the project should start right away. There are millions of Kenyan youth waiting in the wings to score jobs that are dependent on quick completion of that project.

If Kenya government were to be guided by foreign-funded NGOs and the “independent” press, nothing would ever get done in Kenya.

If I was working for a Kenyan NGO or for a Kenyan “independent” media, there is no way I would support the plant, since that would be the beginning of the end of my professional career. 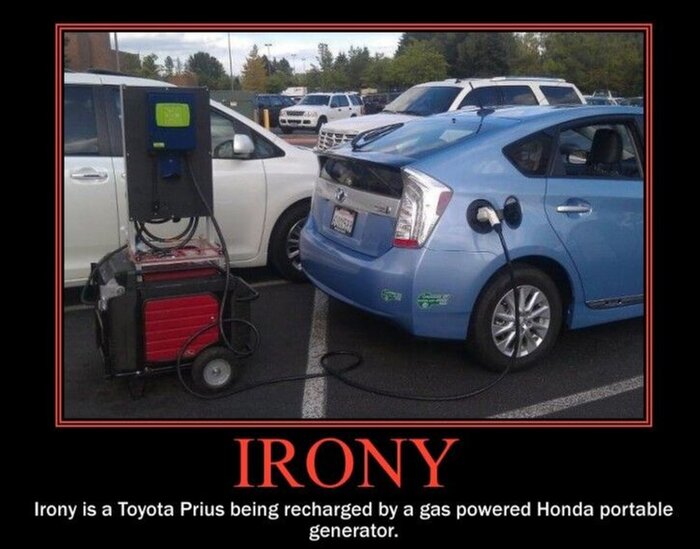 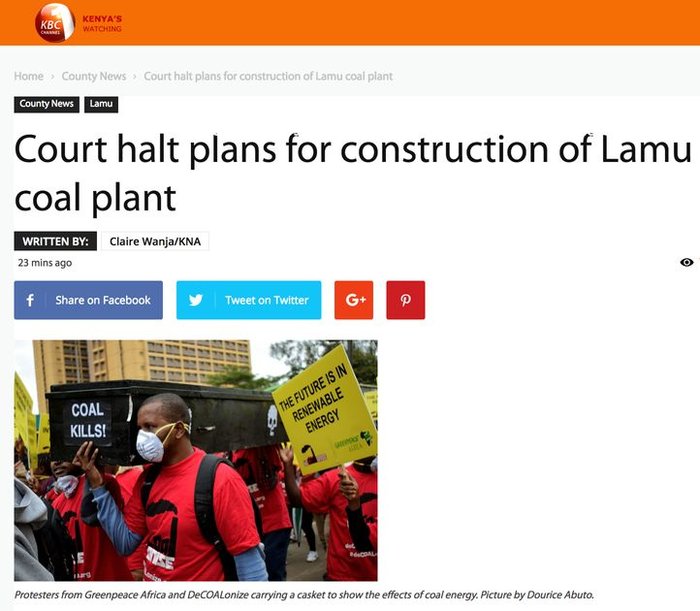 “The National Environment Tribunal (NET), has halted plans for the construction of country’s first ever coal powered plant near the coastal town of Lamu. NET cancelled the licence previously granted to Amu Power, the developer of the controversial Lamu Coal Plant…Earlier, campaign group DeCOAlonize had taken NEMA to court, saying it had not taken note of the adverse effects the project would have on farmlands and the local fishing industry.”
https://www.kbc.co.ke/court-halt-plans- ... oal-plant/

If the complaint was genuine, then it is Lamu people, and not NGOs, who would have been the (main) complainants.

A few years ago, a wind power project in a densely populated area in Nyandarua was rejected by the locals without the involvement of any NGO. A genuine complaint about an infrastracture project doesn’t require NGOs to push it.

Therefore, every policy the government makes, it must be because it is good for the mwananchi, and not because it will please NGOs or foreign entities.

NGOs have been formed - and funded by foreign interests - specifically to sabotage LAPSSET and related infrastructure (including Lamu Coal Power Plant).

With this in mind, time to look at the judgement.

In this case, I cannot blame the judges for the decision they made. The pressure to kill the Lamu Coal Power Plant was enormous.

What happens next? One thing is certain: The foreign-funded NGOs will now increase their propaganda and incitement of the local people. Therefore, the chances that the project will ever go ahead is almost nil. And the sabotage of LAPSSET won’t end there.

Unless, the government changes tactics.

“Its mandate is to hear disputes arising from decisions of the National Environment Management Authority on issuance, denial or revocation of licenses. It also deals with offences from the Kenya Wildlife Management Act and the Kenya Forests Act.”
https://www.judiciary.go.ke/the-nationa ... -tribunal/

Solution to the Problem of Economic Saboteurs Using the Tribunal to Stifle Economic Development: Change the mandate of the tribunal to read:

Its mandate is to hear disputes FOR PROJECTS WORTH NOT MORE THAN KES 5 BILLION arising from decisions of the National Environment Management Authority on issuance, denial or revocation of licenses…

FOR PROJECTS WORTH MORE THAN KES 5 BILLION, dispute to be solved by either cabinet or parliament.

NB: I am no lawyer, but its clear the direction I think Kenya should take in these matters.
Top 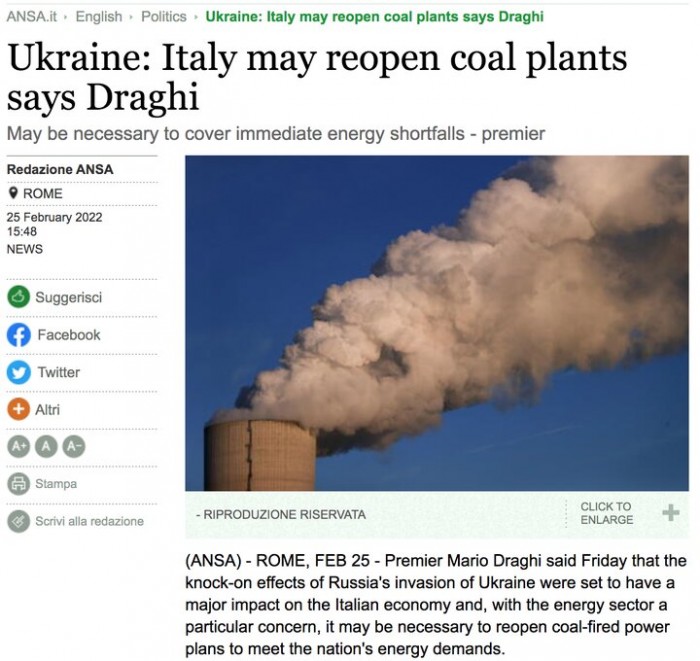 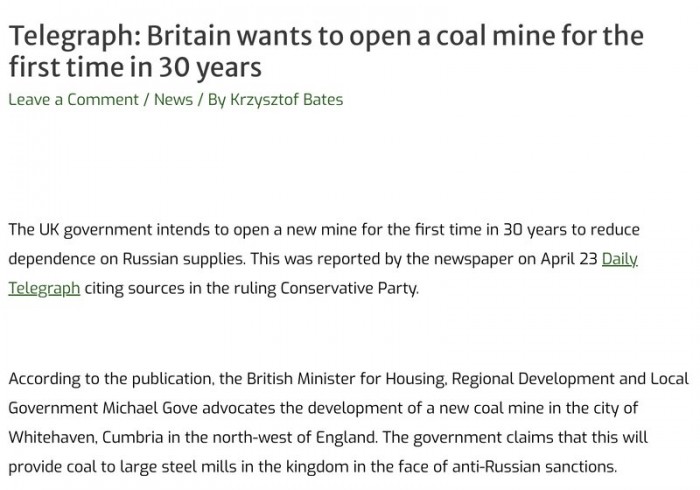 Britain to open coal mine at Whitehaven. 1st coal mine in 30 years.
Top

CNBC: "Europe admits it’ll have to burn more coal as it tries to wean itself off Russian energy"

CNBC (Consumer News and Business Channel) is an American basic cable business news channel owned by NBCUniversal News Group, a division of NBCUniversal, with both indirectly owned by Comcast.