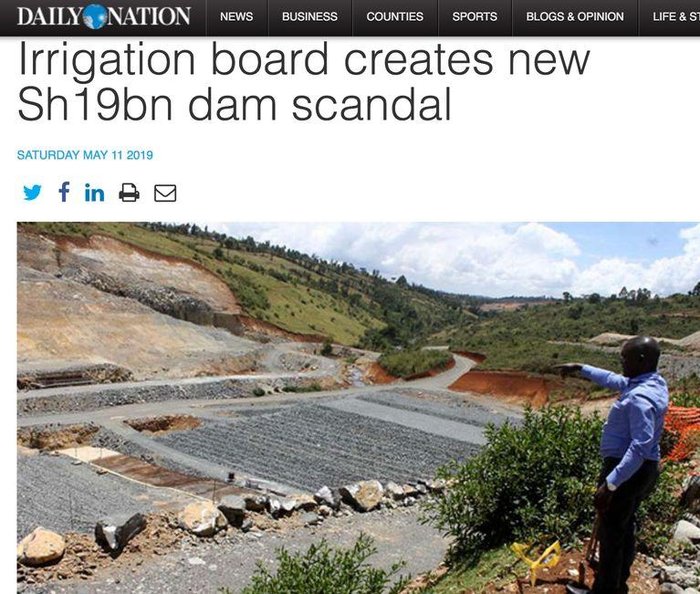 Today’s Daily Nation has this article: “Irrigation board creates new Sh19bn dam scandal”. The question on my mind was, what will it take for this brazen corruption to stop?

Then, as I started reading the article, I realized it is all FAKE NEWS. Shame on you, the Daily Nation.

“A Chinese firm awarded a Sh19 billion tender to construct Lowaat Dam in Turkana County had been blacklisted by six multilateral development banks (MDBs) at the time the National Irrigation Board (NIB) invited bids for the project.”
https://www.nation.co.ke/news/Irrigatio ... index.html

Instead of the Daily Nation writing that a company awarded the tender has been blacklisted by 6 MDBs, it decides to sensationalize the story by calling the matter a “Sh19bn dam scandal”. Very unfortunate.

Section 41 B of the Public Procurement and Disposal Act says, “the board shall debar a person from participating in procurement... on the ground that the person has committed an offence relating to procurement under any other Act or law of Kenya or any other jurisdiction.”

Because of the way the world is at the moment, adding or any other jurisdiction in the Public Procurement and Disposal Act is wrong.

A company can be blacklisted in another jurisdiction due to politics, business rivalry, or pure malice. For example, Huawei has been blacklisted in certain jurisdictions because the Global Mafia is angry that they don’t have a backdoor to current Huawei equipment.

Is it then not in Kenya’s interest to award a tender to Huawei, despite their being blacklisted abroad?

“Any other jurisdiction” should only be considered when awarding government tenders if and only if the entity financing the project have it as a requirement eg. If World Bank is financing a project, then obviously, any company they have blacklisted cannot be awarded the tender (whether the blacklisting was done fairly or not).
Top

Award of big tenders in Kenya and in almost every country in the world is prone to be influenced by corruption. Because of the many factors involved, and the cut-throat competition between the companies tendering for a project, it is not easy to know whether the tender committee was corrupted or not.

That is why it is important for the media and other interested parties should be very careful when researching whether corruption was involved in the awarding of the tender or not. DO NOT JUST MAKE CONCLUSIONS BASED ON THE STRENGTH OF INFORMATION OBTAINED FROM PEOPLE WITH VESTED INTERESTS, often undeclared upfront.

In other words, there are very many variables at play in the field of awarding government tenders.

The media, and other independent analysts should therefore avoid taking sides in tender wars between companies.

If the media, and other independent analysts are only interested on making Kenya better, in terms of tenders, its better to investigate and report on:

And not to report rumour and innuendo as facts.

NB: Big time corruption in Kenya will not be eliminated unless there is a major shift in how it is investigated.

Solution: Make it advantageous for someone to be a snitch. For instance, enact a law that states that if you provide evidence of corruption of amount X, then if the government prosecutes and recovers that money, you are entitled to be paid 10% of X.

Or, to make it even more enticing for people to inform on their corrupt colleagues, friends and family members, let the law state that, once a corruption case is taken to court based on the information you give, you automatically receive 5% of the money involved (stolen or obtained through corruption).

Therefore, if someone has actionable info about someone paid 100 million in a corrupt deal, then if the case is taken to court, he is automatically paid 5 million as he waits for the case to conclude so he can get the other 5 million.

In other words, make snitching a lucrative job.

This would greatly reduce corruption. Corrupt people would be living in terror. It would not be worth it to be corrupt anymore.
Top
Post Reply
2 posts • Page 1 of 1