Kenyan media has reported that, “US troops are in Wajir to step up Kenya’s war on Al-Shabaab…They are not new to this area. They just came in from Somalia and they understand the region well…The camp in Wajir is the second in the country after Camp Simba in Manda Bay in Lamu.”

This is very bad news for Kenya.

For the past one year, there has been plenty of dog whistling and PSYOPS perpetrated by very powerful non-African actors, that was clearly meant to pressure Kenya government to accept “help” from the USA, in terms of “boots on the ground”.

To give a clear perspective why the reason given for deployment of US combat troops to Kenya is not logical: The death ratio caused by terrorism/war/inter-communal fighting between Kenya and Ethiopia in the past year is 1:1,000.

i.e. For every Kenyan who has died in the past 12 months due to terrorism/war/inter-communal fighting, 1,000 Ethiopians have died.

Credible international organisations have classified the war in Tigray as genocide.

Yet, it is not Ethiopia, but Kenya that has been PRESSURED to accept US boots on the ground.

If it is about training or joint exercises, then Kenya should have been allowed to recommend the best location for such exercises.

The best location for such exercises would be a place that is farthest from Somalia border e.g. Turkana county.

PROBLEM: Al-Shabaab TERRORISTS will use presence of American troops in N.E. Kenya to spread propaganda that they are “fighting Americans” in Kenya.

This will help them recruit local youth, who will be brainwashed to believe that they are fighting to “liberate their lands from the Americans”.

It will also help Al-Shabaab recruit gullible youth from other countries, who will be motivated by the fact that there are Americans soldiers fighting alongside Kenyan forces.

NOTE: For as long as I can remember, the UK has had training bases in Kenya.

Those bases are located in Laikipia and Samburu counties - I believe.

Generally, most Kenyans in those counties like the British soldiers. The soldiers don’t have to be armed when moving around the region.

Therefore, the problem is not having foreign soldiers in Kenya. The problem is when Kenya is told, “we will bring our troops to operate in this exact place…and you cannot say no, because we know your security needs more than you do.”

As a Kenyan, I wouldn’t get any satisfaction saying “I told you so”, when terrorism acts increase because of presence of foreign boots on the ground in N.E. Kenya.

Unfortunately - God forbid - presence of these foreign combat troops in N.E. Kenya could even lead to large scale war in the region.

I hope the US govt will reverse this order.

USA could create a base in Gedo, Somalia.

This would immediately send Al-Shabaab TERRORISTS into panic. It would be the beginning of the end to their terror activities.

With American troops on the ground in that region, they would be able to:

(a) Hit Al-Shabaab training bases. This would reduce pressure on Somalia National Army, allowing them to focus on pacifying other less dangerous regions;

(b) Starve Al-Shabaab of funds, by blocking them from taxing locals, without offering any services.

This would be very advantageous to both Somalia and Kenya.

Furthermore, presence of American soldiers in Gedo region will greatly reduce their ability to cross into Kenya. The few who make it to Kenya wouldn’t pose any serious problem to local security forces.


NOTE: Get PDF version of this post HERE && HERE. 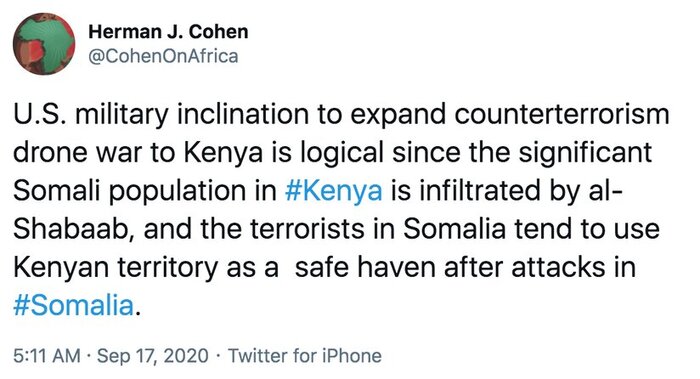