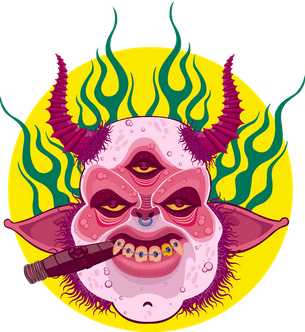 It is said that people are more likely to believe a gargantuan lie than a small lie. Like most people, for a long time I believed the biggest lie ever told. It never occurred to me that there was even the slightest possibility that it might not be true.

Before anyone dismisses me as ‘just another nazi’, let me state my background. I am a Kenyan African. And I bear malice towards none. In this article, I will argue why I believe that there were people with the motive, opportunity and resources to pull off the greatest con-trick of all time.

The story that six million Jews were massacred by Hitler’s Germany during WW2 is based on pure lies. The so-called Holocaust never happened. Of course, many Jews died during the war, but so did many non-Jewish Germans, Russians and others.

To understand how and why the Jewish elite pulled off this massive con, I will first write about what Jews have been doing in Kenya, and then draw parallels with what happened after WWII.

For the past twenty years or so, there has been concerted effort to change Kenya’s history. All senior people in various NGOs in Kenya hold certain views about Kenya’s history that is contrary to the real history. All these NGOs are funded by Jewish elite, either directly, or indirectly. Many of these NGO-people also have various blogs that are highly ranked by Google and other search engines.

Google, like almost all search engines outside China, is Jewish-controlled. Almost all social media companies are also either owned by, or controlled by, elite Jews.

These social media companies also rank the NGO-people right at the top in their algorithms. Consequently, any Kenyan browsing the net is bound to come across Kenyan ‘facts’ that are merely contrived propaganda.

Because of being hit by this propaganda continuously, many young people have come to believe these lies about Kenyan history. It is easier for the young to believe the lies because they did not experience the events being talked about.

Thought: Jews have worked hard to create these companies you are talking about here, and they can do whatever they want since they are privately owned…

Answer: Wrong. Jews have used fraud and other criminal activities to have this monopoly. I should know because many years ago, I had started a small social media site, and Jews chased me away like a dog. From my own site. In another article, I will expound on this, including the connection between Jews owning big companies, and Mossad stealing code and other secrets to make it happen.

Have you ever asked yourself: Why is it that every time Apple comes up with a new gadget, there is always an Israeli company that can hack into it?

To cap it all, these Kenyan-based NGOs pressured the following changes to be made to the Kenyan constitution in 2010:”Notes and coins issued by the Central Bank of Kenya may bear images that depict or symbolise Kenya or an aspect of Kenya but shall not bear the portrait of any individual.”

In other words, throughout Kenya’s history, no one made any accomplishments that make him/her worthy to appear on the currency.

Like a river without a source, Kenya has become rootless - a country’s history erased and replaced by what the Jewish elite believe the history should have been, in order to make it easier to colonise the citizens’ minds.

While other countries celebrate their major historical figures, heroes and heroins on their currency, Kenyans were arm-twisted to do the opposite. The plan being to have young Kenyans grow up without any sense of pride in their history, and therefore easy fonder to be moulded into the type of citizens the Jewish elite want.

In Kenya, there have been loud NGO-led calls for the youth to be given senior positions in government, and also be elected into senior political seats. Interestingly, the people funding these NGOs do not advocate such policies in their countries. Indeed, they come from countries where such calls could lead to someone being accused of ageism.

Why do the Jewish elite want Kenya’s youth in senior government and political positions? Because they would then be able to officially change the syllabus in schools to encompass this bogus history. Once this is done, the brainwashing will be complete.

This phenomenon is not unique to Kenya. It is happening globally. The question is: If Jews, who are probably less than 1000 in Kenya, can change Kenya’s history, and make it be believed by significant sections of the population, notwithstanding the fact that anybody can now write their own story and post it online, what makes it hard to believe they did the same thing after WW2 when only a few people owned any media?

Currently, elite Jews have circumvented the ability for anyone to post anything online by making sure they control all search engines, social media, and other means of communication. They have managed to do that by using strong-arm tactics, including murder. Therefore, you can write whatever you want, but if the Jews don’t like it, you are simply talking to yourself. In 2018. That is how they are able to dictate globally what people believe as fact or fiction.

Neocolonialism is a term that is often used when describing Africa’s poverty while surrounded by plenty. Many Africans believe that it is Europeans and Americans(White people) who are behind neocolonialism. This couldn’t be further from the truth.

It is the Jew, and Jew only, behind neocolonialism in Africa(many Jews look ‘white’ to many Africans). Because of the Holocaust magic wand, most people who know about this would never, ever talk about it, because that would mean the end of their career.

Something to think about: If Jews are not involved in sinister global disinformation racket, why then have they forcefully taken over all means of communication(media, search, social)?

After WW2, Germany was hardly in any position to flex muscle. Jews in Europe and US took advantage of this to present themselves as having the real information about the war. Hitler hated Jews. There’s no doubt about that. But there were no reports of holocaust during the war. Furthermore, census done before and after the war clearly proved the so-called holocaust was a lie.

However, this did not prevent Jews from using their media monopoly to start writing that 6 million Jews were killed by the NAZIs. Books and movies followed. Soon, it was accepted as ‘fact’ that Hitler killed 6 million Jews.

Jews took advantage of the fact that Germans couldn’t set the record straight lest they be seen as advocating for nationalism. Jews slandered all Germans, and no one could raise a finger for fear of being attacked by their media.

If Jews can conspire to change Kenyan history, what makes anyone think they did not also change German/Europe history? Especially since it was far much easier to control the transmission of information 60-70 years ago.

By forcing the world to believe Jews had suffered the holocaust, Jews gained tremendously. They got global sympathy. They are treated better than everyone else. They have engaged in crime, usury, and created parallel governments around the world. And in case anyone talks about it, they cry ‘Antisemitism’. It is like being given a blank cheque.

Monetary-wise, Jews have gained trillions of dollars from the holocaust racket.

How To Prove The Holocaust Never Happened

In Germany, it is illegal to question the holocaust. Why is that? Could it be because the people who were alive during WW2, and are still alive today, could prove it never happened if allowed to talk about it?

Germans above 80 years should be exempted from that law and allowed to tell the world what exactly happened during world war 2, especially in relation to Jews. This is not about Germany. This is about the whole world, because Jews have taken advantage of the so-called holocaust to ride roughshod over all Gentiles.
Last edited by chloe on Tue Jan 01, 2019 10:32 am, edited 1 time in total.
Top

Re: Why The Holocaust Never Happened

This uneducated rant is ludicrous to say the least. What history is the poster talking about? How many sub-Saharan Africans know the name of their great-great-grand fathers? Or the country or region their ancestors were living in 1700?
Top

Re: Why The Holocaust Never Happened