I have a Bitcoin Account. Buying and selling things online using Bitcoin, or other Cryptocurrencies is generally safe. However, investing in Bitcoin is another ball game altogether.

Yesterday, Bitcoin was trading at an all-time high of $28,000. Its market cap jumping to $515 billion, ranking Bitcoin in eleventh place among major global assets such as Facebook, Apple, Visa and Tesla.

You have probably read or heard about people who have become Millionaires or Billionaires just by trading Bitcoin.

Do you know of an African who has made $1 Million just by trading in Bitcoin? Here, I am not talking about “agents”, brokers etc. Since they will always make money whether the investor gains or loses.

I am talking about an INVESTOR.

First things first: “Bitcoin is a cryptocurrency invented in 2008 by an unknown person or group of people using the name Satoshi Nakamoto and started in 2009 when its implementation was released as open-source software.” - WIKIPEDIA.

That is what Wikipedia, bankers, economists and all media say. Yet, it is a lie.

This is the reality of Bitcoin (and other cryptocurrencies said to have no owners): It has “OWNERS” and “ASSOCIATES” of the “OWNERS” - Let me call all of them “The TEAM”.

Suppose you tell yourself: “Why should some people continue making Billions from Bitcoins, while we just watch? No major success happens without taking risks, right? Let me invest my savings in Bitcoin…Or, Let us join forces, 100 of us, draw our savings, borrow from here and there, and invest $10,000 each in Bitcoin - $1 Million worth of Bitcoins.

There are many other “ordinary” people also buying the cryptocurrency, of course. As the currency climbs in value, more and more “ordinary” investors continue buying.

Then, it reaches a point when some of the “ordinary” investors feel the price has climbed enough, and they can start selling some stock.

At this juncture, “The TEAM” start a quick DUMPING of their stock. The cryptocurrency drops from, say, $40,000 to $10,000 in a week. And they continue DUMPING, this time a little at a time, to ensure the currency is not rising.

The “ordinary” investors panic. They start DUMPING their stock, at a major loss.

As they fly in their private jests, or sailing in their yachts, they laugh at how foolish “ordinary” investors are.

The stories you read about “investors” making Millions and Billions from these Cryptocurrencies, those are “ASSOCIATES” of the “OWNERS” of the Cryptocurrencies, and their friends. And since it is like a secret society, the public has no way of knowing about this racket.

And since it is not regulated…

And since the Big Media is in their pocket…

It is very likely that when the “OWNERS” and “ASSOCIATES” of these “independent” Cryptocurrencies meet, they joke: “Who said a sucker is born every minute? Make it 1 second!”

PREDICTION: Cryptocurrencies backed by REAL assets will become more common in the near future (already started in some countries). Investors will be able to trade in these currencies, just like they trade in normal currencies. They, will, of course, be regulated, just like cash money is.

1. February 2018: “The cryptocurrency market, led by bitcoin, plummeted after US-based exchange Coinbase said it would hand over the data of nearly 13,000 of its customers to the US Internal Revenue Service (IRS).

Bitcoin, the world’s number one digital currency, was trading at slightly over $9,529 at 8:21am GMT on Monday, off last week’s peak of $12,000. The virtual currencies market has been recovering following a dramatic plunge earlier this year after regulators across the world announced plans of a crackdown on their exchange, trade, or circulation.”

2. September 2018: “The most famous cryptocurrency in the world, BITCOIN, just patched a disastrous weak point that could have crashed the whole network…

The developers of Bitcoin Core – the software used to power the Bitcoin blockchain – released a note announcing that they'd patched a vulnerability that would have allowed a user to interfere with network and crash it, making the digital coins practically useless. The bug was described by a Bitcoin.org co-owner, whose Twitter handle is @CobraBitcoin, as “very scary…”

Laughable how some people thought Bitcoin is one way to avoid the BANKERS.

4. March 2019: “In an extensive report submitted to the US Securities and Exchange Commission (SEC), cryptocurrency research firm Bitwise Asset Management reveals that 95% of Bitcoin spot trading has been inaccurately reported by a majority of the cryptocurrency exchanges…”

CONCLUSION: There you have it, ladies and gentlemen. Bitcoin can be hacked and reduce your investment to ZERO. However, if that happens, the “OWNERS” and “ASSOCIATES” of the “OWNERS” of Bitcoin will be smiling all the way to the bank.

It is the “ordinary” investors who will lose all their investment in the Cryptocurrency. 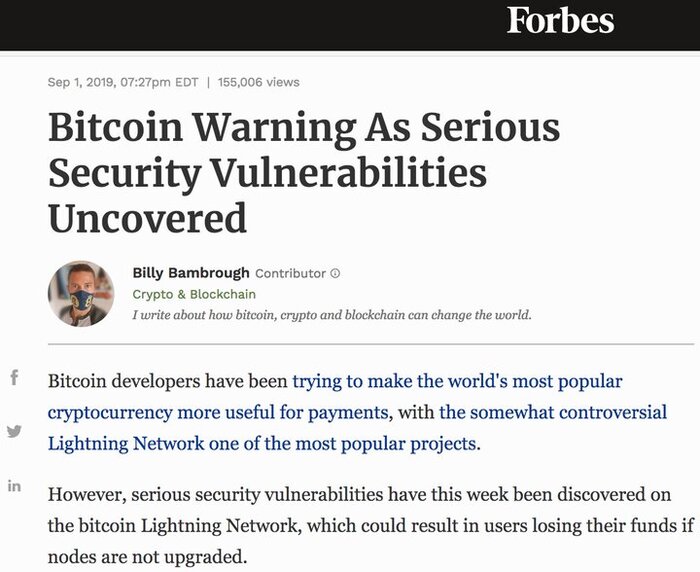