The Rich World’s Climate Hypocrisy...They beg for more oil and coal for themselves while telling developing lands to rely on solar and wind...

The developed world’s response to the global energy crisis has put its hypocritical attitude toward fossil fuels on display. Wealthy countries admonish developing ones to use renewable energy. Last month the Group of Seven went so far as to announce they would no longer fund fossil-fuel development abroad. Meanwhile, Europe and the U.S. are begging Arab nations to expand oil production. Germany is reopening coal power plants, and Spain and Italy are spending big on African gas production. So many European countries have asked Botswana to mine more coal that the nation will more than double its exports.

The developed world became wealthy through the pervasive use of fossil fuels, which still overwhelmingly power most of its economies. Solar and wind power aren’t reliable, simply because there are nights, clouds and still days. Improving battery storage won’t help much: There are enough batteries in the world today only to power global average electricity consumption for 75 seconds. Even though the supply is being scaled up rapidly, by 2030 the world’s batteries would still cover less than 11 minutes. Every German winter, when solar output is at its minimum, there is near-zero wind energy available for at least five days—or more than 7,000 minutes.

This is why solar panels and wind turbines can’t deliver most of the energy for industrializing poor countries. Factories can’t stop and start with the wind; steel and fertilizer production are dependent on coal and gas; and most solar and wind power simply can’t deliver the power necessary to run the water pumps, tractors, and machines that lift people out of poverty.

That’s why fossil fuels still provide more than three-fourths of wealthy countries’ energy, while solar and wind deliver less than 3%. An average person in the developed world uses more fossil-fuel-generated energy every day than all the energy used by 23 poor Africans.

Drax [United Kingdom electric power generation company] has agreed to extend the life of its coal-fired electricity generation units through this winter as the government scrambles to shore up Britain’s energy supplies.

The plant had been due to close its coal operations in late September as Drax attempts to reduce the carbon in its operations." 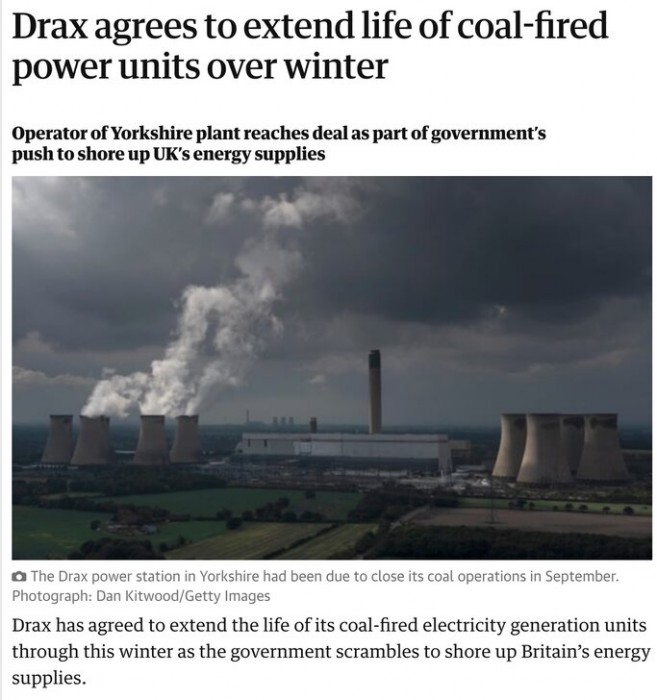